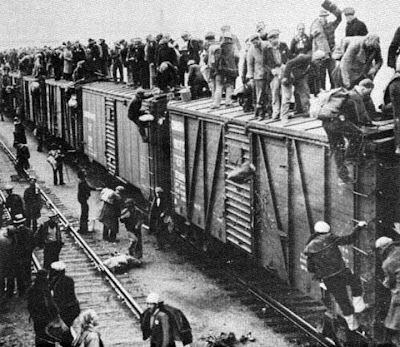 
The term "hobo" has a variety of possible origins:  it could be short for the term "homeless vagabond"; it could refer to someone who is "homeward bound" according to H.L. Mencken; it could mean "Hoe Boy" since men looking for work often carried hoes with them; or it could come from the greeting "Ho, Beau!"  Regardless of its origin, hoboes were not tramps or bums, but migratory workers.

Hoboes who road the rails during the Great Depression were often fathers who had lost their jobs.  Sometimes they were women looking for work.  All too often, they were teenagers whose parents could no longer afford to feed them.  Some sources claim that 2 million men and 8000 women road the rails during the Dirty Thirties.  The Southern Pacific Railroad reported throwing half a million transients off of boxcars in the year 1932 alone.  On one freight train, the hoboes were so plentiful they looked like blackbirds and the brakeman shouted "All Aboard!" as if he was operating a passenger train.  As many as 6,500 hoboes were killed each year either in railroad accidents or by railroad "bulls" who were trying to get rid of unpaying passengers.

Hoboes had their own unwritten code of conduct as well as their own signs and symbols.  Below is a poem that I discovered on a blog which talks about hoboes during the Great Depression.

my grandma Blanche packed up the family
for another Midnight Shhhhh! Move
(before the landlord came for the rent)

They squatted there year-round
as did other families, who had
their own stories of landlords

Blanche fed every man who rode the rails
They put up signs for the next hobos:
A cat (“kind lady”) and two shovels (“work here”)

She felt that every person deserved food, medicine, and
shelter (today, this is called Socialism) and that
giving the men a task helped build their egos

So Dorney swept the steps and Gibb fed the chickens
(“borrowed” by Blanche on their way out of town)
while another collected eggs and so on. They never

stayed long. Blanche later insisted the term “Hobo”
was not slander but, as in H.L. Mencken’s writings,
it meant “homeward bound.” Indeed, some went “home”

right in their back room, too sick, too weary to go on.
Blanche knew the doctor, got them morphine, helped them
sip broth. She also washed them, like family, before burial.

When I asked my mom about those days, it began a years-long,
booze-fed, continuing conversation about poverty, the
Dust Bowl, generosity, and the human spirit. Blanche, before her

in those days, was Ma Joad incarnate, with a touch of
Woody Guthrie. “But Mom,” I said, “you got to live in a
cottage by a lake. Where did Grandpa get that kind of money?”

My mother Charlotte, Blanche’s only daughter,
gazed out the back window and smiled ruefully: “Child, it
may have been a lake, but there was no water in it back then.” 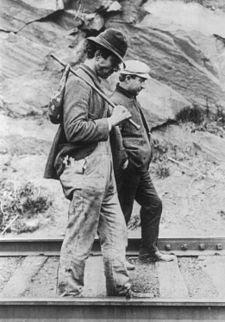