Our introduction to New York City did not go as planned.  Rob and I decided to visit the Big Apple to celebrate our 20th wedding anniversary.  We had a smooth flight into La Guardia, but what ensued was a comedy of errors.  We had prebooked a shuttle to deliver us from the airport to the hotel in Manhattan.  We phoned the designated number and were disconnected.  I phoned a 1 800 number and got the concierge who helped us contact the driver for the shuttle we had already booked a couple of weeks before.  She told us a shuttle would arrive within 20 minutes.  After 45 minutes, an airport employee phoned again on our behalf and was told that the shuttle driver had gone to the wrong terminal.  An hour after we first phoned, the shuttle driver finally showed up.  We presented our receipt and he said that he had never heard of Grayline, the agency we used to book the shuttle.  What???  He phoned the company and after several minutes we got it rectified.  We climbed into the van and stopped at another terminal to pick up more people.  They did not have a voucher either.  They climbed in the back and passed up a credit card to the driver which was rejected.  A second one was also rejected and the driver climbed out of the van opened the side door and threatened to eject the two passengers unless they payed CASH.

Finally we were on our way to Manhattan hotel, a ten mile journey.  It was our first experience with New York traffic.  All I can say is it makes Toronto traffic look tame!  Everyone drives as if they're on their way to a fire.  They run red lights, they lean on the horn, they tailgate, they threaten to run down whole packs of pedestrians and they brake at the very last moment.  As the driver tried to navigate the streets of Queens, one of the passengers started to berate him: "I told you not to take the Queensboro Bridge. We'd be stuck in traffic for an hour. But you didn't listen! I told you...I told you... I told you!"

Stopping at an intersection, we felt a huge JOLT.  Everyone's neck was jerked back.  What was that?  A yellow taxi cab had rear-ended us.  At this point, I expected someone to pop out of nowhere and yell:  "You're on candid camera!"  But no, it was for real.  The driver popped his head in the van and asked if everyone was okay.  Did we want to press charges?  No thank you.  Our driver took the wheel again and the irate tourist took up his tirade.  But this time the driver had had enough.  He let him have it!  No one was going to tell him how to navigate in New York.  In the meantime Rob rubbed his neck wondering if he had a case of whiplash ($40 worth).  After what seemed like an eternity, we reached 8th Avenue.  The driver put the van in park and got out our suitcases.  Rob tipped him, feeling sorry for the abuse he endured at the hands of the irate tourist.  With our lives intact, we said goodbye to the driver and entered the Amsterdam Court Hotel.  Welcome to New York City! 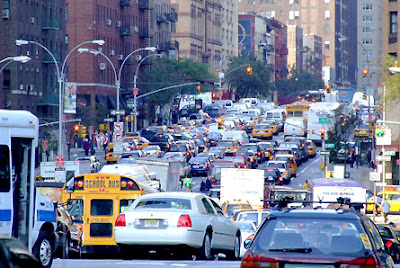