With our dry spring and summer this year, many American farmers are facing drought-like conditions like they haven't seen since 1956, and before that, 1936, the hottest summer on record.  Here are 10 interesting facts about the Dust Bowl.

1.  A black blizzard, or dust storm travelled 2000 miles across the plains and over the mountains to the Atlantic Ocean on May 11, 1934.  Dust swirled in New York City for five hours, covering landmarks like the Empire State Building and the Statue of Liberty.

2.  After World War I, American farmers started using new tractors on the plains.  Over the next decade or so, they overplowed the land and their livestock overgrazed it.  Once the wheat dried up due to lack of rain, there was nothing left to keep the soil intact.  Furthermore, the wheat market collapsed as a result of the Great Depression.

3.  Many know about the plague of grasshoppers that destroyed the meagre crops on the prairies.  But how many know about the hundreds of thousands of jackrabbits who also ate any living vegetation?  "Rabbit drives" werer held by townspeople who would corrall jackrabbits, put them in pens, and then smash them to death with baseball bats and clubs.

4.  Crazy methods were employed to make rain fall on the plains including:  killing snakes and hanging them belly up on fences; paying a rainmaker $500 to launch rockets full of dynamite and nitroglycerine.  Someone suggested covering farms with waterproof paper.  Someone else proposed paving the plains.

6.  The dust storms carried heavy static electricity:  motorists drove with chains on their cards to ground them and a handshake could send the receiver falling to the ground due to the charge.

7.  Anyone who inhaled the dust was susceptible to cough spasms, asthma, bronchitis, influenza and silicosis (a disease coal miners used to get).  Hundreds perished, especially the elderly and children, from the "brown plague", or dust pneumonia.

8.  The government paid farmers to butcher their starving livestock; the meat was used to feed residents of Hoovervilles (shantytowns).  Farmers were also encouraged by the government to plow under their fields and plant grass.

9.  Although many Southerners and Midwesterners fled their states to go to California to pick fruit (called Okies) three quarters of farmers stayed put.  For those who migrated, it was often only to the next state.  Only 16,000 of the 1.2 million migrants to California were Okies.

10.  Only one-fifth of Okiies were actually from Oklahoma, the rest being from other states.  However, Okies became a blanket term for all agricultural migrants, who were treated so poorly that signs were posted saying:  "Okies & dogs not allowed inside." 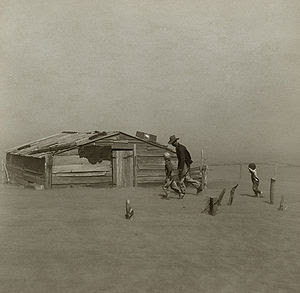