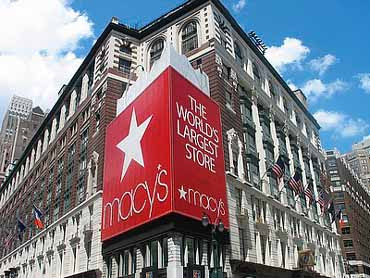 Rob and I were strolling down the streets of New York when we spotted a large red sign which read "Macy's The World's Largest Store".  Remembering the movie "Miracle on 34th Street", which featured Macy's Department Store, I wondered if we were indeed on 34th Street.  Sure enough, I looked up and the sign confirmed my suspicion.  What a surreal moment!

We opened the massive door to the world's largest department store (at least it says so on the store front, but when I double-checked on the Internet I found out that title belongs to a store in South Korea).  We walked across the first floor, under giant chandeliers, past perfumes and colognes, to the escalator.  On the second floor, we saw women's clothing.  On the third floor we saw more clothing.  But we also noticed something different:  wooden escalators.  I don't remember seeing those in Canada when I was young.  I knew they must be quite old, maybe dating back to 1902 when the Herald Square store first opened.  Upon further inspection we saw cracked marble floors, likely also originals.

The film, which debuted in 1947, had scenes filmed at night in the 8-floor department store.  The movie's star, Maureen O'Hara filmed scenes with Santa Claus on the actual float used in the 1946 parade.  Parade scenes were footage of the real parade.  Edmund Gwenn, who won an Oscar for his role as Santa Claus, actually played Santa Claus that year in the parade.  Maureen O'Hara's love interest, Mr. Payne, loved the movie so much he wrote a sequel to it, although it was never produced.  The movie received a warm reception by audiences across America.  Although most of its cast has passed away, Miracle on 34th Street still enjoys a large audience on video and DVD.

Meanwhile, back at Macy's in 2012, Rob and I reached the 8th floor and my husband declared:  "Every floor has nothing but clothes.  This is the most boring store I've ever seen."  I suspect that the store is nothing like it was during its heyday when it sold a variety of goods (including toys at Christmas time).  I beg to differ, though, about Rob's comment:  while Macy's may not sell the most exciting items, its rickety wooden escalators and cracked marble floors give it character.  Many agree:  the department store became a National Historic Monument in 1978.  Although it is undergoing a renovation, I hope it never loses its original charm. 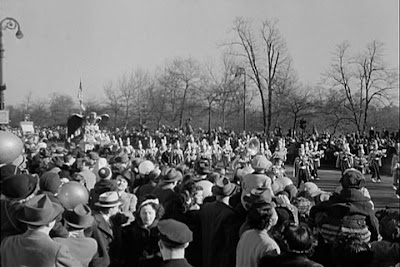 Photo of Macy's Thanksgiving Day Parade circa 1946 courtesy http://home.comcast.net.
Posted by Linda at 16:21