Lunch Atop a Skyscraper

We were preceded by famous figures like Charles de Gaulle and Marilyn Monroe.  Our destination was New York City's Top of the Rock, part of Rockefeller Centre, the site of everything from dog shows to business deals to the lighting of the Christmas Tree.  At the summit, we purchased a t-shirt for Thomas with the letters NYC and a famous 20th Century image called Lunch Atop a Skyscraper.

I was so fascinated with the image that I googled it today.  It turns out it was snapped by Charles C. Ebbets during the construction of the R.C.A. building on September 29, 1932.  It appeared in the New York Herald Tribune on October 2, one of 300 of Ebbets' photos published in the newspaper.  Much debate has gone on about whether the photo is real or fake.

The photo depicts 11 construction workers lunching on a crossbeam with Manhattan in the foreground  and Central Park and the Hudson River in the background.  The men are seemingly oblivious to the fact that they are hundreds of feet from the ground and could drop to their deaths at any moment:  some eat, some smoke cigarettes and some engage in conversation.

However, as one blogger pointed out online, there is one man at the far right of the photo who looks straight at the camera with fear in his eyes and what appears to be a bottle of liquor in his hand.  Yes, in 1932 seeing skscrapers was becoming a commonplace occurence with 16 of the eventual 82 skyscrapers already completed.  But having lunch in the clouds was not a common occurence.

John D. Rockefeller employed 40,000 workers in the completion of the original six buildings that would make up Rockefeller Plaza.  America was in the midst of the Great Depression and men had to do whatever it took to put food on the table for their families.  Regardless of whether or not Lunch Atop a Skyscraper is genuine or staged, it is a surreal photograph that keeps you guessing. 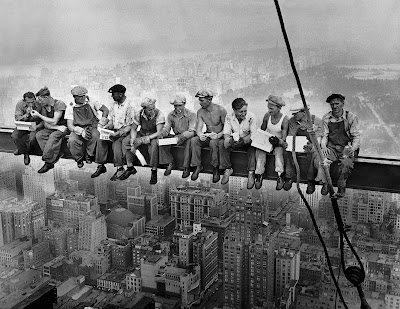