Rob and I went from the worst to the best ride of our lives, all within 24 hours.  For $12 my husband rowed me across the lake in Central Park.  We floated on its glassy waters, amidst ducks and baby turtles.  Around the little lake's perimeter, tourists snapped photos, painters painted, cyclists rolled past.  Trees flanked its banks:  weeping willows, massive oaks, stately elms.  Above the treeline rose the skyscrapers of New York City:  the Trump Hotel, the Dakota Hotel (where john Lennon stayed) and a castle topped by four turrets.  Above the skyscrapers, the occasional jet crossed the clear blue sky above us, silently carving a puffy path out its exhaust.  We sat in our rowboat, one of a dozen on the lake, like part of a scene from a painting.  It was a little bit of the country inside the city; a little bit of history (150 years worth) in the middle of modernity; a bit of tranquility in the middle of chaos.  We watched a Hasidic Jew row his wife across the lake as she talked on a cell phone.  We watched a couple enjoy a picnic lunch in their boat.  Another couple snuggled, looking like newlyweds on their honeymoon.  We passed by a fountain surrounded by tourists with cameras and artists with easels.  Then we returned our rowboat, left our moment of tranquility on the lake and re-entered the frantic streets of New York City. 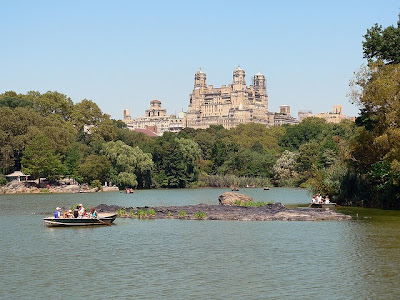