From Crime Scene to Tourist Haven

My husband Rob packed the May 1993 issue of National Geographic in his suitcase for our trip to the Big Apple.  The issue contained an article about the condition of Central Park, an 843-acre wooded area designed in the mid-1800's for the citizens of New York to enjoy.  I read the article after we returned from our trip; what an eye opener it was.  The Central Park of 2012 is quite different from the one 20 years ago.  Joel Swerdlow, the author of the piece, started his article by saying that he approached a friend to stroll around the park with him and the friend's response was:  "No thanks, I want to live."

Mr. Swerdlow went on to describe some of the dangers of Central Park.  Anyone who visited the Police Station had to go through a metal detector and every officer who worked there had to wear a bullet proof vest.  He explained that on any given night 500 destitute people slept in the park, their boxes dismantled and discarded the next morning.  In fact, a Federal Court ruled that a park bench could function as an address in 1984.  He also talked about a scam where a man would meet a female tourist staying at a hotel on the park, they would have dinner and he would say that he was in town for a business deal.  They would plan to meet for Sunday brunch, but he would arrive late and disheveled explaining that he was mugged and now had no money for his business transaction.  The woman would lend him the $2000, and then the man would leave and she would never see him again.  The police rarely tracked down these thieves.

Another problem faced by park visitors two decades ago were the tons of garbage each year, leading to nightly visits of the rodent variety, each measuring up to 17 inches long.  In 1988, park officials mounted nests in some of the park's 26,000 trees to attract barn owls to kill off the unwanted rats but not enough owls appeared.  Although the author did not mention graffiti, it apparently was a problem in the park in years past.  However, Rob and I were told that now graffiti is painted over within 24 hours to prevent it from becoming an epidemic.

New York city officials have worked hard to clean up the park and the proof is in the pudding.  The Central Park that Rob and I saw a couple of weeks ago was beautiful and safe (see Central Park:  A Tranquil Oasis).  If you ever visit the Big Apple, take the time to visit the "oasis inside of the concrete jungle".  It will be the highlight of your trip. 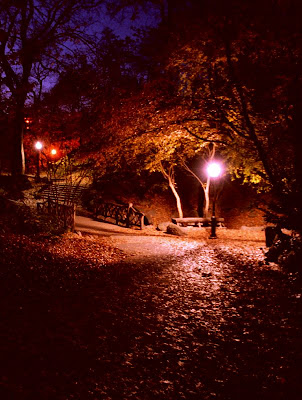