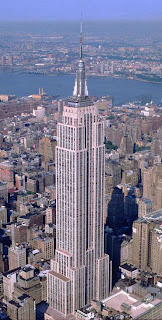 We were greeted by a man in a maroon suit and a black cap.  We paid our fee and then climbed to the second floor where we wound our way through a never-ending line.  We shared an elevator with several other bodies as we rose almost 100 stories to aroom full of 1930's era photographs showing how the Empire State Building was constructed.  Several construction workers lounge on a beam above New York as they munch on their lunch.  We climb the last 6 floors to the top of the edifice.  At the summit, a young couple from Toronto asks Rob take their picture and they do the same for us.  We take in the view of New York City, the Hudson River to the right, the East River to the left.  We see the tops of skyscrapers, including the Chrysler Building, an office building built shortly before the one we stand on.  We spot bridges:  the Brooklyn, the Manhattan and the Williamsburg.  In the distance we see the Vera Dero Bridge.  Down below we see yellow taxi cabs which resemble dinky cars.  And the piece de resistance?  The Statue of Liberty at the edge of the harbour.  I strain to take just the right photo, but as I zoom in on my camera, I lose focus and get nothing but a blurry blob.  We are at the highest point in New York City at 102 stories -- at least until the completion of the Freedom Tower (104 stories) which will replace the World Trade Centre.  I put away my my camera and we visited the gift shop where Rob bought a gift for Jacqueline -- a "Doorman" Teddy bear with a maroon suit and a black cap.  We exit the shop, enter the elevator and descend within seconds to the base of the tower.  I love New York! 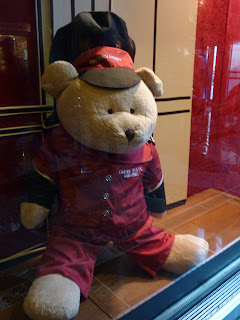