How the Red and White Checkered Autograph Book Became a Bestseller

The red and white checkered autograph book sat in the shop window, the young girl admiring it with her father.  When her thirteenth birthday arrived, she opened her father’s gift – it was the autograph book.  She immediately started writing in it, talking about her hope of one day becoming a journalist or writer.


However, the girl’s plans were put on hold when the occupying government told all Jews that they were not citizens anymore.  Her sister, Margot, received a letter asking her to report to a work camp.  That was when the family went into hiding in “The Secret Annex” above the girl’s father’s business located on a street paralleling an canal.

"Daddy, Mummy and Margot can't get used to the sound of the Westertoren clock yet [from the church beside the Secret Annex] which tells us the time every quarter of an hour.  I can.  I loved it from the start, and especially in the night, it's like an old and faithful friend."


She brought her red and white checkered book along with her and wrote in it daily.  She talked about the inconvenience of having to share a room a Jewish dentist, another refugee, and a bathroom with the other occupants of the annex.  The girl resented sharing food with the Van Pels family, saying that they always ate too much.  In such close quarters, she clashed with her mother whom she didn’t think treated her with enough respect.  She adored her father, however, and the feeling was mutual.  The girl also talked about her first kiss, which she shared with Peter, the son of the Van Pels.


The girl made one last entry in her red and white checkered book on .  Three days later, the German Security Police stormed the annex, arresting all of the occupants, throwing them in cattle cars and deporting them to concentration camps.  The girl and her sister ended up at Bergen Belsen where they both succumbed to typhus, only a month before the camp was liberated by the Allies in 1945.


But what happened to the red and white checkered book?  Miep Gies, one of Mr. Frank’s four employees who helped his family while they were in hiding, hid the diary in her desk hoping that its author would return one day.  However, all of the occupants of the Secret Annex perished except Mr. Frank whom Miep gave the diary after the war.  The girl’s father handed it over to historian Annie Romein Verschoor hoping she could find a publisher for it, but there were no takers.  Annie did not give up on it though and she shared its contents with her husband Jan Romein who wrote an article titled “Kinderstein” for his newspaper, a former Resistance publication called Het Parool.  According to Romein:  “To me, however, this apparently inconsequential diary by a child…stammered out in a child’s voice, embodies all the hideousness of fascism, more so than all the evidence at Nuremberg put together.”


The journalist’s article attracted attention and a publisher named Contact agreed to publish the red and white checkered diary titled “Het Achterhuis” in 1947.  Five years later the English translation was published as “Anne Frank:  The Diary of a Young Girl”.  At hundreds of millions of copies, the book remains the most widely read tome next to the Bible (see www.miepgies.dk).


The red and white checkered autograph book which once sat in an shop window now sits in a museum in .  Anne’s wish of becoming a published writer came true. 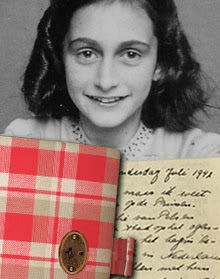