Long before the National Enquirer and the Weekly World News, the New York Sun used sensationalist headlines to attract readers.  In August of 1835, the newspaper ran a six-part series about life on the moon:  on the first day circulation rose to 15,000 and by the day they announced humans were on the moon, the readership peaked at 19,360, the highest in the world.  Needless to say, the six articles were all part of a hoax.

The articles cited a man named Dr. Andrew Grant whose colleague, Sir John Herschel, a famous astronomer, had studied the moon through a gigantic telescope in an observatory at Africa's Cape of Good Hope.  His observations were:  unicorns, two-legged beavers and furry winged humanoids populate the moon; craters, amethyst crystals, rivers and vegetation are prevalent on the moon.  The moon articles not only fooled the general public, but also a committee of Yale scientists who travelled to New York City to find these articles, supposedly published in the Edinburgh Journal of Science.  Once at the New York Sun headquarters, the scientists were spirited back and forth between the printing and editing departments, all on a wild goose chase.

On September 16, 1835, the Sun admitted the hoax.  The Edinburgh Journal of Science had ceased publication and the man cited, Dr. Grant, was a fictional character.  It is likely that the articles were written by Richard Adams Locke, a well educated reporter at the Sun.  Even so, most readers found the hoax amusing and continued to buy the newspaper which remained in print until 1950 when it merged with the New York World Telegram.  In 1967, the newspaper was printed for the last time.

Edgar Allan Poe's poem "Balloon Hoax", published in 1844, was supposedly inspired by The Great Moon Hoax.  Merchandise appeared on the market like moon-themed wallpaper and snuff boxes.  Sir John Herschel's integrity was compromised by the articles and he would never live it down. 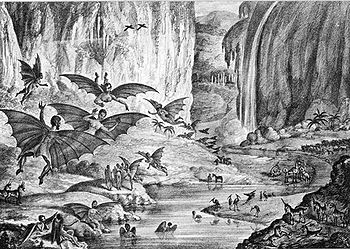