The 1908 Olympics were scheduled for Rome, Italy, but Mount Vesuvius erupted in 1906 derailing those plans.  The new venue was London, England, a metropolis of over a million people.  It was a city of contrasts with some of the world's richest and poorest people, a city full of beautiful landmarks and full of smog, a city full of promise and yet full of despair.  This was the city that would host over 2000 athletes from 22 nations.

The London Games was allotted a budget of 15,000 pounds.  White City Stadium, with a capacity for 68,000 spectators, had a track around the perimeter with a pool for swimming and a platform for gymnastics in the middle.

London is where the marathon was lengthened from 25 to 26-plus miles as Princess Mary wanted the race to start beneath the windows of the Royal Nursery and the king wanted it to finish beneath the Royal Box.  The marathon's new length proved too long for its winner, Dorando Pietro of Italy, however, who collapsed many times and even ran the wrong way.  Because he was aided by two officials after his collapse, he was disqualified, and the gold medal went to the runner-up, an American. 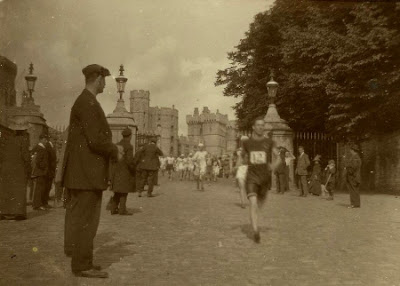 The 1948 Olympics followed a 12 year hiatus caused by World War II.  They were held in post-war London, a city of royalty, rationing and rubble-strewn streets.  Because England was still hurting from the war, no new venues were built for the Games nor any Olympic Village for the athletes who were housed in existing housing.  Germany and Japan, part of the Axis, were not invited tot he competition.  Russia was invited but chose not to go.

A total of 4104 athletes from 59 nations attended the event which was opened by King George VI.  London's red busses and military vehicles transported atheletes from their billets to the events.  The 600000 pound budget did allow for some luxuries at the opening ceremonies including the release of 2500 pigeons, the raising of the Olympic flag and the firing of a 21 gun salute.

Athletes participated in 17 sports.  Most of the events were held at Wembley Stadium including the atheletics.  "The Flying Housewife", a 30 year old mother of 2 from Holland named Fanny Blankers-Koen, received 4 gold medals in athletics.

The 1948 Games were the first ones to be televised but the audience was small as only 88000 Brits owned televisions at the time. 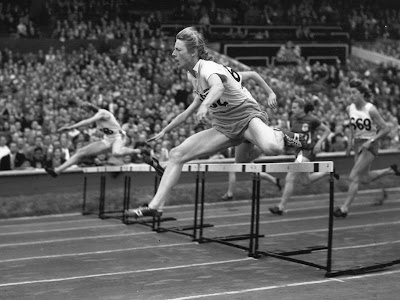 The 2012 Olympics are being held at six venues across England including a new stadium in London's East End, originally a poor Victorian neighbourhood that is now being revitalized by the Games.  London is host to 19500 athletes from 204 nations who will stay at a new Olympic Village built on the River Lea.

With a budget of 9.3 billion, the Brits pulled out all the stops for the opening ceremonies in which Queen Elizabeth, in her first acting job, arrived escorted by James Bond.

Standouts at the Games so far have been Michael Phelps in the pool, Serena Williams in tennis, and Canadians in rowing (silver for both men's & women's eights).

Just as Princess Mary watched the marathon in 1908, Princes William and Harry were present the other day at the men's gymnastics team event cheering on their country.

The projected television audience for the 2012 Games is 4 billion spectators. 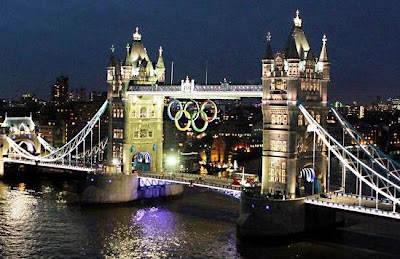