In honour of Julia Child's 100th birthday (posthumously) here are 15 things you may not know about the American chef, author and TV personality:

1.  Julia's husband, Paul, built her a custom made kitchen with extra high counters to cater to her 6 foot 2 inch frame.  Her kitchen, including her 800 knives, is in the Smithsonian Institute now.

2.  Although Julia was deemed too tall to join the military during World War II, she did join the O.S.S. (the precursor to the C.I.A.) and held the position of a top secret researcher there.

3.  Julia did not learn how to cook until she was almost 40 when she accompanied her husband to Paris, France and signed up at the "Cordon Bleu" Cooking School.

4,  While Houghton Mifflin rejected Julia's cookbook, Mastering the Art of French Cooking, it was later published by Alfred A. Knopf after about 10 years of writing and revisions.

5.  Julia was fired from her job at W & J Sloane, an elite furniture store, for "gross insubordination".

6.  Julia was paid $50 per episode for her first cooking show broadcast by Boston Public Television.

7.  Growing up in a well-to-do family in California, Julia took elocution classes, likely the reason she seemingly talked with a British accent.

8.  Julia is credited with the move towards gourmet cooking in America.  As one New York Times writer put it, "without her we would still be wallowing in green bean casserole".

10.  Julia once considered becoming a professional basketball star or a novelist.

11.  The famous chef's first T.V. appearance was to promote her cookbook; she brought along a copper bowl and a whisk and cooked an omelette on the show, garnering so many favourable reviews it landed her a cooking show.

12.  "The French Chef", the title of her first cooking show, was chosen partly because it was short enough to fit on one line in T.V. Guide.

13.  Julia Child was the first PBS performer to win an Emmy.

14.  Contrary to rumour, Julia never dropped a chicken on the air, but she did drop a potato pancake.

15.  When asked what her guilty pleasures were, Julia said:  "I don't have any guilt." 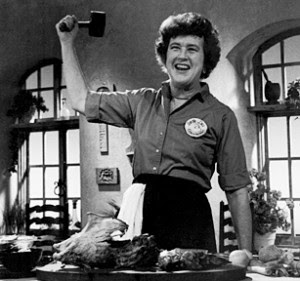