The day dawned with perfectly blue skies and warm temperatures, the perfect day for an outing.  We headed west on Highway 403 past Woodstock to the Embro Road, exited north and within two minutes we arrived at the Leaping Deer Corn Maze.  Now this wasn't just any corn maze.  It was twelve acres of endless rows of 8 or 9 foot cornstalks; even my 6 foot 4 inch husband could get lost in there.  With blue skies above and greenery to our left and right, we followed the path to the east, winding our way through the labyrinth.  It was like we were alone, shut off from the world in our own little paradise.  We heard nothing but the sound of our bodies brushing up against the corn stalks, nothing but the sound of our voices.  I was surprised at how green the stalks were given how little rain we've had this spring and summer.  Left here, right here, straight ahead.  At one point we came to a dead end.  Then Thomas discovered a look out and from high above the maze we realized that we should be following the sun to find our way out.  Once we had our "compass" we were good to go.  Jacqueline led us the rest of the way through the labyrinth until she spotted the shiny steel silo and knew we were at the exit.  While I was happy that we found the exit, part of me wanted to re-enter the maze and meander its pathways once again, to get another dose of its tranquility.  After buying some cobs of corn, and some cookies from the bakery, we hopped into our van and pulled out of the parking lot, the giant green maze in our rearview mirror.  Goodbye until next year! 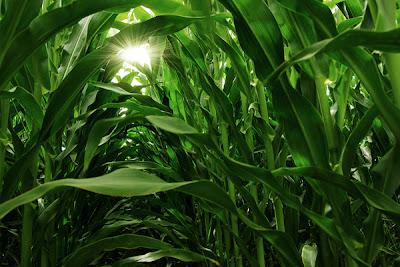