The Ghosts of Ellis Island

With water cascading under it and the Stars and Stripes flying above it, Lady Ellis Island took us across New York Harbor.  We snapped a few photos of the New York skyline behind us and Lady Liberty in front of us.  At Liberty Island we remained on the ferry since the statue is closed for renovations this summer.  We continued our passage to Ellis Island where we disembarked.  Giant trees with maple-like leaves and bumpy trunks grew on the lawn.

The magnificent building, with four elaborate turrets, looked like something out of the 19th Century in Russia.  Opened in 1892, Ellis Island served as a station for millions of immigrants for 32 years.  We climbed the wide steps and entered the rust coloured brick building where we were treated to a giant display tracing the history of American immigration.  Enlarged photographs of immigrants graced the walls.  Piles of old valises and trunks sat in a glass case.

We read about Germans and their Conestoga wagons, of Chinese and their railroad workers, Italians and their workers' unions.  We saw photos of child labourers, their noses blackened.  We saw caravans of Mormons making their way through the desert to Salt Lake City, looking like black ants on a giant sandhill.  We saw the Orphan Trains fleeing the rough streets of New York City for gentler towns to the West.  We saw the long queues of immigrants separated into the healthy and the unhealthy, some staying indefinitely at the island hospital.  Millions of Americans passed through these doors.  And then it closed its doors forever in 1924, abandonned and left to fall into a state of disrepair.

In the 1950's, a lady flew over Ellis Island and saw the ghost building which peaked her curiosity.  She rented a small boat and took it to the island.  To quote the lady:  "There were no signs of people, but I was sure they were there".  Through the windows, she caught glimpses of the past:  a dusty upright piano, a NO SMOKING sign, empty bottles.

In the 1980's, excavation started on Ellis Island.  The almost century old building, bit by bit, was restored to its former glory.  A display case was built to house the piano, the NO SMOKING sign and the empty bottles, among other items.  Now the building is a museum, a permanent record of all of those who passed through its doors. 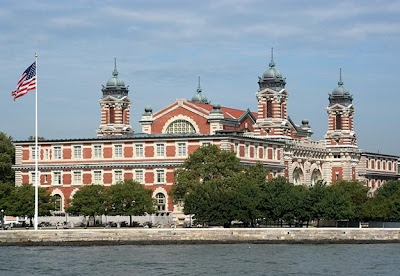 Photo of immigration station at Ellis Island.
Posted by Linda at 18:58