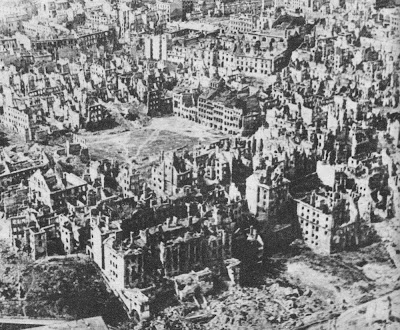 Photo of Warsaw circa 1945 courtesy http://upload.wikimedia.org.


The Norwalk Hour reported that a full eight months after the total destruction of Warsaw, Poland by the Nazis, you could still smell the stench of thousands of bodies trapped under the rubble (Sept. 20, 1945).  However, despite the devastating loss, Varsovians rebuilt the Old Town within 11 years.

Eighty to ninety percent of Warsaw was destroyed by the Nazis in the dying months of World War II, a city occupied for the entire duration of the war.  The vicious attacks were largely a retaliation on the part of the Nazis for the Warsaw Uprising.  Churches, theaters, palaces, businesses and an opera house were all demolished.  Warsaw's market square, with its narrow cobblestone streets, was also destroyed.  A city that, previous to the war housed 1.3 million inhabitants. was reduced to 900,000 by 1944 and 1,000 after the final bombardment by the Nazis.  Eight hundred thousand occupants were killed including 700,000 Jews.

Old footage of Warsaw streets in 1946 shows German prisoners of war marching in columns with shovels strung over their shoulders to worksites where they collect some of the 720 million cubic feet of rubble.  The backbreaking work was done manually, the debris carted away in horsedrawn lorries.  The work was not just tiring but dangerous as there were 98,000 unexploded mines and shells trapped under the debris.  Women also contributed to the clean-up as was the case in Berlin and other German cities (see my post "Trummerfrauen", October 11, 2011).  The footage shows that as the workers clear the rubble, life goes on in Warsaw:  a policeman directs traffic; children run down an alleyway, playing; and women sit on piles of rubble cleaning radishes.

By 1956, the Old Town was completely rebuilt, all in its original medieval design dating back as far as the 13th Century.  Rubble workers continued to clear the streets and construction workers continued to rebuild.  Another major section of the city was finished by 1963.  The Royal Castle was restored by 1970.  Today, tourists come from all over Europe and the world to view the beautiful Old Town which has been designated a UNESCO World Heritage Site. 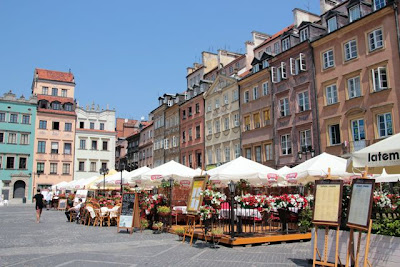