Glenn Murray's manuscript was rejected for ten years until one fateful night, he was invited to a dinner party, and the rest is history.

Years ago, Glenn found an excellent co-author, a man named Bill Kotzwinkle, author of ET:  The Extra-Terrestrial, which later became a blockbuster movie.  The pair set to work writing a story about a real-life dog named Walter, owned by a local storeowner, who sat in the shop and passed gass, clearing out all of the customers.  After years of reading to school-age children, Glenn knew what made them tick; he figured he'd have them rolling in the aisles.  He sent it to several editors, who said:  "We laughed and laughed, but we cannot publish this."  The reason it was rejected is that they had used the word "fart" in their title and throughout the book.

Five years passed without one taker for Walter the Farting Dog.  The co-authors returned to the drawing board, switching the forbidden word to "he did it" and the title to Get That Dog Outta Here!  Although Glenn was unhappy with the changes, he was willing to bend to get the book published.

Finally, one fateful night, Mr. Murray was invited to a dinner party and the host asked him to read the gassy dog story as after-dinner entertainment and all of the guests "fell off their seats roaring with laughter".  One individual present that night was a publisher who said he must publish the book, even though he didn't publish children's books.  The publisher became North Atlantic Books and the title remained Walter the Farting Dog.

Mr. Murray points out that the name of the game in getting your book published is tenacity.  Just as a child would never learn to ride a bike if he gave up the first time he fell off, a writer would never publish a book if he gave up after the first rejection.  Be patient and you will be invited to a dinner party, asked to read your manuscript and knock the socks off of a guest who just so happens to be a publisher, agent, editor, famous author, etc.

P.S.  Walter the Farting Dog reached #1 on the New York Times Bestsellers List.  It was made into a movie starring the Jonas Brothers. 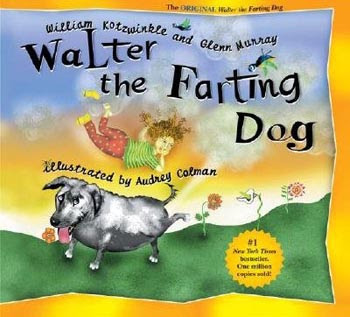