When I was driving my kids to school the other day, I saw an eagle perched on a dead tree beside the railroad tracks along Garden Ave.  I started to think about the purpose of dead trees.  What was the point of keeping them?  I started to notice other dead trees along the side of the road, some with vegetation growing around them.  This morning while volunteering at BCS, I read a caption "A Dead Tree Isn't Dead" on a Kindergarten worksheet that I was photocopying.  I thought:  That's a great idea for a blog post!

So, I googled "A Dead Tree Isn't Dead" and several sites came up.  I found out that several species live inside standing dead trees, referred to as "snags".  They include:


Another site gave me a list of what purposes the snags serve for these species:

-hunting perches (like the eagle that I saw)
-singing/perching
-nesting (exterior & interior)
-communication
-food storage
-weather protection (now I know where local birds go in the winter time)
-food source (insects)
-resting
-roosting (settling down at night, for diurnal birds, or during the day, for noctural birds, on an elevated spot for the purpose of resting)

I was curious as to the number of snags in the average forest so I googled the question.  According to one Washington State study, the average wooded acre contains 16 standing dead trees.  A Kentucky wildlife website stated that a wooded area should have a minimum of 6 snags, but ideally 30.

All of the websites seem to agree that dead trees are full of life.  So, the next time you take a walk in the woods or a drive down the road, look for those dead trees.  They're more plentiful than you think! 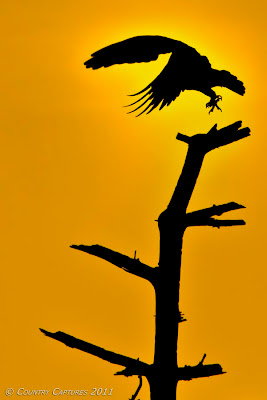