Native New Yorker, Joel Meyerowitz wondered how he could help his fellow Americans in the days after 9/11.  A photographer by trade, he picked up his camera and started snapping pictures of Ground Zero.  However, a police officer reminded him that it was a crime sight and photos were forbidden.  Joel obeyed the policeman and left but after walking several blocks, he thought:  "No photos meant no history."  So he managed to convince the powers that be that he would do an excellent job and they granted him unimpeded access to Ground Zero.  Nine months later, he had a collection of over 8000 photos.

He documented, day by day, week by week, the clean up of 16 acres of Manhattan.  After nine months, he placed his 8000 photos in a historical archive collection called "Aftermath:  World Trade Center Archive" for "our children and grandchildren to see".

By the 10th anniversary, Ground Zero would have parapets with the names of the victims inscribed.  Construction would begin on new towers, but they would stand around rather than on the hallowed ground where the original towers once stood. 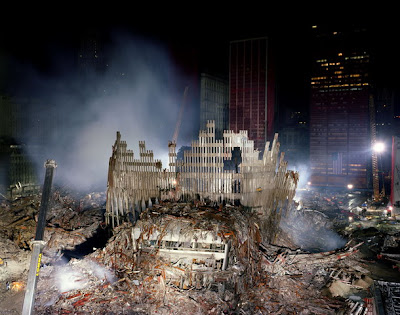 Photo of Ground Zero at night courtesy www.masters-of-photography.com.
Posted by Linda at 12:47