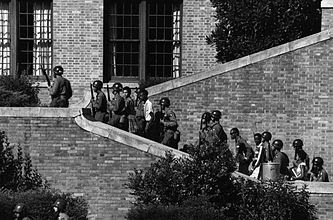 Such was not the case when the Little Rock Nine (Elizabeth Eckford, Ernest green, Jefferson Thomas, Terrence Roberts, Arlotta Walls LeNier, Minnijean Brown Gloria Ray Karlmark, Thelma Mothershed and Melba Patillo Beals) entered high school on this day in 1957.  Daisy Bates, the head of the local NAACP chapter, arranged to have nine Black students enroll at Central High School in Little Rock, Arkansas that year.  After the landmark case of Brown vs. The Board of Education of Topeka, the court had ruled that segregation was unconstitutional and that all schools should be desegregated, but putting the theory into practice was a different story.  Governor Orval Faubus arranged to have the State National Guard meet the nine Black students with guns and gas masks ready to prevent their entry into the school.  White students called the Blacks "Communists" and other names; they spit in their faces; they threw bricks at them; and they blocked their entry into the school.  Reporters were beaten up by the angry mob.

Little Rock soon became not only national but international news at a time when the Cold War was at its peak:  how could America justify treating its own citizens so poorly when it was supposed to be the land of democracy?  President Eisenhower realized something needed to be done so he pleaded with the Arkansas governor to call off the National Guard and allow the nine students to enter the school.  However, Mr. Faubus would not budge.  In the meantime, President Eisenhower sent federal troops to Arkansas to officially integrate the school.

On September 25, the Little Rock Nine entered the school, each with a patroller by his or her side.  While the show of solidarity was impressive, White students continued to harass the Black students at any given opportunity.  Melba Patillo Beals was stabbed at one point and had acid thrown in her face; fortunately her patroller immediately threw water in her eyes to prevent her from being blinded.  Minnijean, taunted by Whites in the cafeteria, poured a bowl of chili on one of them only to be suspended for six days while no punishment was doled out to the instigators.  One of the students had his or her home bombed in the Fall of 1959.

In the meantime, Governor Faubus tried to stop integration by closing down all four Little Rock high schools.  The board even fired 44 high school teachers who were later re-instated.  But the damage was done:  all of the Little Rock high school students could not attend school during "The Lost Year".  Some of the Little Rock Nine transferred to other schools due to the harassment, but three remained to graduate.  Melba Patillo Beals ended up becoming a teacher at Central High which is 60% Black today.

So as my son heads back to high school tomorrow, I can breathe a sigh of relief knowing that he can do so freely without harassment.  We take education for granted, but it came with a high price for the Little Rock Nine. 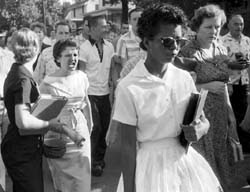 Photo of one of the Little Rock Nine courtesy www.nps.gov.
Posted by Linda at 17:31