The Girl at the March on Washington 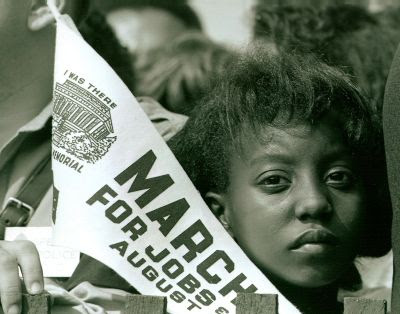 
On August 28, 1963,  Edith Lee-Payne's 12th birthday, she and her mother attended The March on Washington (see my post "I Have a Dream", August 28, 2011).  In a crowd of 250,000, the young girl stood in front of the Lincoln Memorial, the President who gave the country the Emancipation Proclaimation, and listened to Martin Luther King Junior's "I Have a Dream Speech".  She was amazed at how children just a few hundred miles to the south of her, did not have the same rights.  Afterall, she ate at the same lunch counters as Whites, rode on the same busses and trains, attended the same schools and in some cases churches, and lived in the same neighbourhood.  She was living the dream that Martin Luther King spoke of.  With a serious look on her face and a banner in her hand which read "March for Jobs & Freedom", she protested as one of hundreds of photographers snapped her photograph, unbeknownst to her.  Within the year, President Johnson signed the Civil Rights Act, largely influenced by the March on Washington.

Edith returned to her everyday life, later moving to Detroit, Michigan.  In 2008, her sister was leafing through a catalogue when she came upon a Black History calendar with a young Edith on the cover, the banner in her hand.  She phoned her sister who determined to track down the photograph.  Miss Payne started her search at the Smithsonian, then the Libraryr of Congress Prints & Photos and then the National Archives & Records.  Finally, with some help, she found the photograph in question.  It was later determined the photo was taken by Rowland Scherman who was paid double for his participation, but with the understanding he would relinquish rights to the photographs.  He also snapped two other photos that day which included Edith's mother.

On Edith's 60th birthday, she returned to Washington to celebrate the dedication of the Martin Luther King Junior Monument.  She wrote that she was humbled to be associated with the Black leader and the Civil Rights Movement. 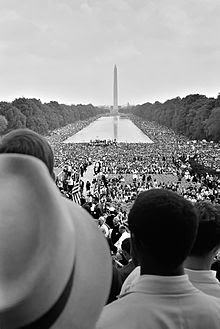