It was a bright sunny day without a cloud in the sky.  I was walking Thomas in the stroller around the old Forbes Brothers GM Dealership in downtown Brantford while Rob negotiated a deal on a Cavalier.  I wheeled the stroller inside the dealership and Rob and I watched a surreal story unfold on the television screen.  A plane had hit the World Trade Center tower and the building was billowing black smoke.  Later we learned that a second plane had hit the second tower which was also on fire.  Another plane hit the Pentagon in Washington D.C.  It felt like the world was about to come to an end.  While we sat anxiously waiting to see what might happen next, a fourth plane was headed towards the White House.  However, this plane would not reach its destination.  Four passengers stormed the cockpit, wrestled with the terrorists and changed the plane's flight path.  Fortunately, the plane never reached Washington D.C.  Sadly, it crashed in a Pennsylvania field.  Todd Beamer, one of the heroes that day, led the charge to the cockpit, yelling "Let's Roll!"  Here is Neil Young's tribute to the 9/11 heroes.

Dedicated to all of the victims of 9/11. 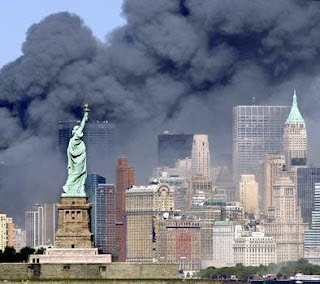