California businessman William Campbell lost his wife to cancer.  She left one dying wish, though, and that was that her husband would open a reading room in downtown Oakdale to help the neighbourhood residents.  William complied by packing up his library of books and carting them downtown to set up in a building which he already owned.  With bars on the windows and graffiti on the walls, he was surrounded by gang members and homeless people.  But he was determined to fulfill the wish of his late wife.

Bit by bit, neighbourhood people trickled into the Reading Room.  A young girl wanted William to teach her how to read.  A teenage girl wanted magazines with current hairdos.  A young man wanted an SAT prep book to prepare for the exam.  Three young boys wanted a computer to play computer games.  William granted each request.

A local reverend questioned Mr. Campbell's motives, but as he got to know him, realized that his reasons were altruistic.  Local gang members stole his computer and later trashed his store.  William remained undeterred.  He cleaned up the Reading Room with help from the community members who had become his friends.

The young girl was soon reading Dr. Seuss books.  The teenage girl kept him company each day as she read her magazines.  The young man studying for his SAT only scored a 900.  But with William's help he persevered and after writing the exam the second time, he scored a 1540, gaining him acceptance to college and even a scholarship.  William employed one of the local gang members who grew to respect and appreciate his employer.

Made into a movie starring James Earl Jones, it's a heart-warming tale which shows how one person can make a difference.  William honoured his wife's wish of "More Love, Less Hate".  And the man who was never able to have a family of his own, gained a family in the process. 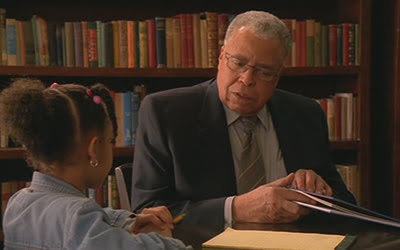