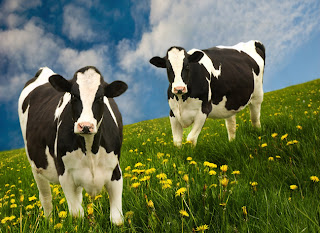 
We buy at least 3 large bags of milk per week.  That's 12 litres of milk for four people.  At $4.39 a litre, that's  $13.17.  Of course, we have a teenager in the house so he counts for two.  Last weekend, I bought 1 gallon of milk in Niagara Falls, New York for $1.88!  Why is American milk less than half the price of its Canadian counterpart?  Are American cows that much different than Canadian ones?  Does it cost more to milk a Canadian cow than an American one?  Do American cows moo differently than Canadian cows (maybe they have an accent)?  Do American cows not bleed just like the Canadian ones?  Do more cows live in the United States than in Canada?

I know that the Canadian dairy farmers aren't making money in the milk business because we know of one such family who is thinking about selling their farm because they can't make ends meet.  So who's making the profit?  I'm assuming the milk companies are.  Someone has to be pocketing that extra money given that our colourful bills are just about at par with those plain green ones just below the border.

It's a sad commentary on society when a plentiful country like Canada has such high prices on staples like milk (or for that matter, bread).  When my Dad was a little boy, he had all the milk he wanted in the summers which he spent on the farm with his five cousins.  They were not considered rich by any stretch of the imagination but they had enough food to go around.  They even made their own ice cream from the milk.

Now I can see why so many Canadians wait hours at the border each weekend to do their shopping.  Even if they burn up gas while their car idles, they can fill up their tanks at the American pumps and still be further ahead financially.

So, the next time you buy a bag (or jug) of milk, write a letter to your local milk company.  Maybe if enough of us complain, Canadian milk companies will drop their prices. 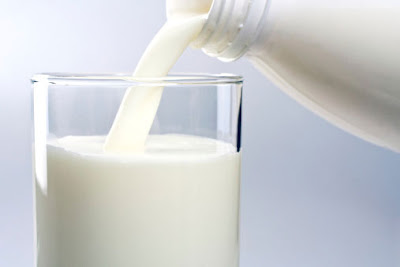