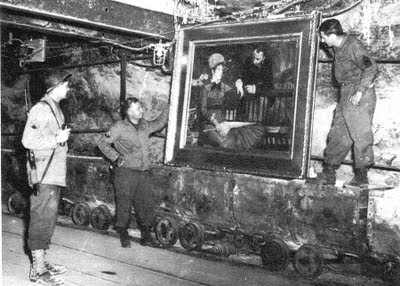 Photo of looted painting discovered in cave courtesy http://2.bp.blogspot.com.
The Monuments Men, 350 strong, were a group of middle aged, highly intelligent, low ranking officers who were recruited in 1943 to preserve the culture of Europe.  With day jobs as art historians, curators, architects and artists, these men set out to rescue, preserve and repair paintings, sculptures, monuments, bridges, palazzi, etc.  Many of these objets d'art were looted by the Nazis and were stored in castles and salt mines.  One convoy with 200 paintings was headed to Hermann Goering's birthday party, but was intercepted by the Monument Men.  Some treasures were hidden by the Allied Armies  behind false walls, in wine cellars, basements, country churches and medieval fortresses.  Twenty percent of Europe's art was looted by the Nazis.  Despite having no vehicles, gasoline or typewriters, the Monuments Men were able to save and catalgoue many of these treasures.  Although the Monuments Men disbanded in 1951, the quest for missing objets d'art continues; as recently as 2010, a painting called "Jewish Women with Oranges" was discovered in Germany.  Many missing pieces still remain at large. 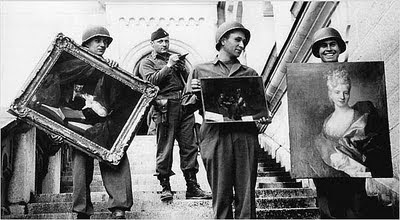 Photo of Monuments Men with looted art courtesy http://2.bp.blogspot.com.
Posted by Linda at 10:35