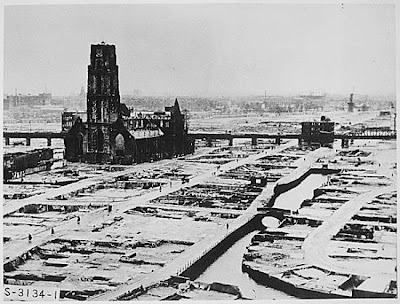 
Rotterdam resident Jeff Noordermeer remembers the event like it happened yesterday.  It was May of 1940 and he and his family huddled on the first floor of their apartment building as the Luftwaffe planes flew overhead, so close that they took the chimneys off some of the rooftops.  They experienced two and a half hours of sheer terror in which their neighbour was so scared her dark hair went completely white.  When they climbed out of their apartment building, Rotterdam was in ruins.

A city of 600,000 residents, Rotterdam was named after a dam on the River Rotte.  The city, the second largest port in the world, was filled with canals in which the young Jeff Noordemeer would spend hours watching the canal rats run back and forth.  He and his family would rent bikes and ride to the outskirts of Rotterdam where they would frolick at a North Sea beach.  The city was also known for its football as it was home to more professional football clubs than anywhere in Holland.

Jeff's world would change in May of 1940 when the Nazis invaded.  Initial reports indicated that 30,000 inhabitants were killed and that they were still pulling bodies from the rubble seven days after the bombardment.  However, modern reports put the number of deaths at 1,000 and number of wounded at 1,000.  One square mile of Rotterdam was completely flattened.  Eighty-five thousand people were left homeless after 25,000 buildings were demolished, including the apartment building where Jeff lived.

The Noordermeer family escaped from their collapsed apartment building.  Across the street, the grocery store had been destroyed and loose groceries were everywhere.  Jeff's mother asked him to pick up as much food as he could as she knew they would soon be starving.  They started a "death walk" through the rubble-strewn streets to a park where they hid under trees, while the Nazis continued to attack.  Finally, when the bombing subsided, they made their way to the beach where Jeff had swum not so long ago with his father.  Red Cross members helped the victims there.  Mr. Noordermeer, who was at work when the bombing occurred, returned to find his home in ruins, assuming his family had perished.  However, with some effort, he relocated his family at the beach.  The Noordermeers found a vacant building at the outskirts of the city, but were soon evicted.  The Red Cross found them temporary housing.


Nineteen forty-four was a vicious year for Rotterdam as many starved to death due to the famine.  Others were rounded up by the Nazis and taken to work camps.  However, many survived to see the rebuilding of the Dutch city.


While Berlin was rebuilt largely by women, Rotterdam was rebuilt with the help of children who gathered the loose bricks. The Dutch chose to start with a clean slate and rebuilt the city using modern rather than medieval architecture. However, the Laurenkerke was rebuilt in its original style. The Noordemeer's moved to Limburg where the father got hired to work in a coal mine. But they always missed Rotterdam, and its beautiful canals and bridges.

A rebuilt Rotterdam circa 1960.