Smuggled on a Fishing Boat


"I remember standing there on the beach one night -- it is very cold in October in Denmark -- and saw a small child, really a baby, who had been drugged so he wouldn't cry.  Crossing the straits to Sweden was dangerous, because the sea was running high and stormy.  I remember how I thought at the time about the Nazis' madness, causing such a small child so much suffering.  It was clear to me that we had to fight this system of theirs." (Peter Ilsoe, Danish Resistance)

On October 1, 1943, the Nazis, who occupied Denmark, announced the they would arrest and deport all of the country's Jews.  However, they did not count on the love of the Danes for their countrymen.  Within two weeks of the announcement, almost 8000 Jews had been smuggled out of Denmark to the safety of Sweden.

Word leaked on September 28 that the Nazi occupiers were planning on rounding up all Jews.  Rabbi Melchior made an announcement in his synagogue, asking his congregation to warn all Jewish family and friends.  Furthermore, Danish civil servants secretly made plans to hide them.  They phoned friends, suggesting that they look in their phone book for Jewish sounding names and phone them one by one.  The Danish underground also got involved in the plan.

They intended to smuggle the Jews out of Denmark by sea to Sweden.  However, the Swedish government had already turned away Norwegian Jews, forcing them into concentration camps.  Why would they welcome the Danish Jews with open arms?  Here is where one man made a difference.  Niels Bohr, a Danish physicist who was on his way to the United States to work on the Manhattan Project, heard about the planned deportation.  The Swedish government had orders to send him to America immediately.  However, he announced that he would not budge until the Swedish diplomats opened their doors to his countrymen.  He appealed directly to King Gustaf and within a short time, his request was granted.  On October 2, Swedish radio announced they would grant the Jews asylum.

Under the darkness of night, the Danish Jews slipped into fishing boats, rowboats and kayaks as well as freighters and small ships to cross the Oresund Strait to Sweden.  The Nazis patrolled the waters and so while the Jews waited their turn, they stayed hidden in the woods and in cottages away from the coast.  Sadly, 80 Jews were discovered in a church loft, after a young Dane who was in love with a German soldier divulged their hiding place.  However, ninety-nine percent of the Danish Jews managed to escape the country safely.

As a further testament to the good will of the Danish people, when the Jews returned to Denmark, in most cases they found their homes, gardens and pets well cared for by their neighbours, a stark contrast to some European countries where Jewish homes were looted.  Who would have thought that a small nation of 4 million would be able to carry out such a plan against its powerful occupiers? 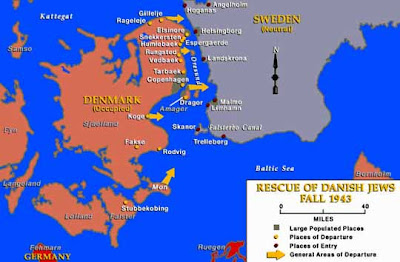