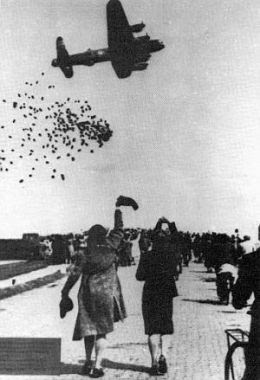 "One could see the gunners waving in their turrets. A marvellous sight. One Lancaster roared over the town at 70 feet. I saw the aircraft tacking between church steeples and drop its bags in the South. Everywhere we looked, bombers could be seen. No one remained inside and everybody dared to wave cloths and flags. What a feast! Everyone was excited with joy. The war must be over soon now."
(Arie de Jong, 17 year old Dutch student)

Four and a half million unliberated Dutch survived on tulip bulbs and sugar beets during the Nazi occupation of 1944-1945.  With a blockade in effect, and with the early onset of winter making the barges impassable, unliberated Holland was slowly starving.  Flour was impossible to come by.  In October of 1944, butter became obsolete.  Meat coupons were rendered worthless.  A ration consisted of:  100 grams of cheese every two weeks, 1000 g of bread per week (later 400 g), 1 kilo of potatoes per week and 1.3 litres of vegetable fat per seven months.  Some farmers were compassionate enough to give vegetables to their fellow Dutchmen in the city.  Many survived on tulip bulbs and sugar beets.

While their stomachs grumbled, their bodies shivered as the Dutch had no heat, no gas or electricity during the Hongerwinter.  Some became desperate enough that they swapped their wedding rings.  Others took apart furniture to burn or even houses.

Help came in the form of Swedish flour which the Dutch used to bake bread.  However, what saved thousands of the Dutch was Operations Manna, Chowhound and Faust, launched in April and May of 1945.  Manna was run by the Royal Air Force in which over 3000 Lancaster bombbers and almost 50 Mosquitoes, loaded down with food rations, flew at 150 metres above the occupied zone and dropped their contents.  Chowhound was executed by the United States Air Force and fulfilled the same purpose as Manna.  Faust was launched by the Allies, a smaller operation.

The Dutch welcomed their liberators with open arms.  Some savoured their food, others wolfed it down and vomited shortly thereafter.  A few even died because their body could not handle the shock of digesting real food again.  The Dutch were so filled with gratitude that they planted tulip bulbs which spelled out MANY THANKS!  They would not forget their Allied liberators.  Ever since, the Dutch have sent tulips to Ottawa each year to show their appreciation for Canada's role in their freedom.

Sadly, about 20,000 Dutch citizens still perished during the Hongerwinter.  But the number would have been much higher if not for the help of Operations Manna, Chowhound and Faust. 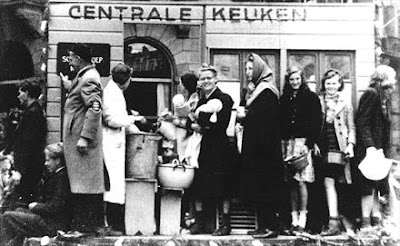 Line up at soup kitchen during winter of 1944-1945 courtesy http://themasterforger.wordpress.com.