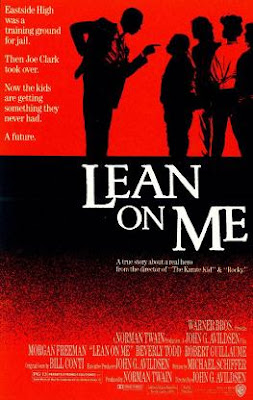 
"Welcome to the Jungle" blared on a ghetto blaster as slovenly students walked down the halls.  Graffiti covered every wall.  Drug deals went down in every corner.  A girl had an expensive blouse ripped right off her back.  A student screamed for help from his locker, after being locked in.    The principal hid in his office.  Most teachers hid in their classrooms.  One who dared to come out, attempted to break up a fight between two thugs, and paid with a vicious beating, landing him in the hospital.  Welcome to Eastside High.

Eastside High, located in Paterson, New Jersey, was once a successful school.  In fact, back in 1967, teacher Joe Clark taught history classes that were filled with eager students, on fire to learn.  It was an institution of learning.  The students learned and the teachers taught.  The principal ran the school.  A sense of school pride permeated the halls.  However, at that time, the teachers started to sell out to the union, sacrificing teaching standards for higher salaries.  Joe Clark saw the writing on the wall and left for an elementary school in the suburbs.

Twenty years passed and the state of New Jersey intervened when it was revealed that Eastside High students couldn't even pass the Minimum Basic Skills Test (only 33% passed).  Joe Clark was brought in from the suburbs to rescue the disastrous school.  He agreed to take over on one condition:  he would have free reign.

Joe Clark pulled up his sleeves and wasted no time getting to work.  One of the first moves he made was to gather a list from the teachers of all the drug dealers and takers in the school.  At Mr. Clark's first assembly, three hundred of them covered the stage like ants on an anthill.  As students in the seats watched unamused, the new principal declared that every one of the druggies was hereby expelled.  A hush went over the auditorium.  Mr. Clark had sent a powerful message to the student body.  He proceeded to put chains on all of the doors and arm himself with a baseball bat to protect his students from the drug dealers.

Then the new principal set to work cleaning up the school.  Students painted over the graffiti on the walls.  Others collected garbage.  Soon, the school looked more like it had when Joe Clark was a teacher there.

Next, he set to work improving Eastside High's test scores.  Each of the 200 plus teachers was expected to arrive early or stay late to tutor students who were struggling.  Everyone focussed on the task at hand.  Yet even though the students worked hard, they still were not able to bring their test scores up enough and a second test was scheduled.  Back to the grindstone went the teachers and students.

As Joe Clark walked Eastside's Halls, he tried to get to know the names of as many students as possible.  He made a point of saying hello and asking how each student's day was going.  He tried to build morale every chance he could get.  Once he found three boys simply wandering.  He asked them to visit the music teacher and rewrite the school song.  In a short time, the school choir was belting out "Fair Eastside" and all of the students were expected to learn the song.

However, just as the school was starting to get back on track, a bitter parent, whose son was expelled, threw a monkey wrench into Mr. Clark's plan.  The fire department arrived one day unannounced and arrested the principal for chaining the doors, a fire code violation.  He was hauled off to jail.  Eastside students picketed the jail, supporting Mr. Clark's attempt to keep them safe from the drug dealers.  The principal was released just in time to get the news that Eastside students had passed the Basic Skills Test! 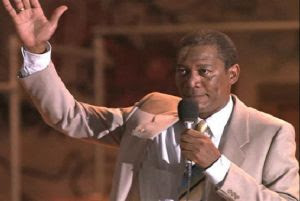 Photo of Morgan Freeman as Joe Clark in "Lean on Me" (1989) courtesy www.reelfilm.com.