Words evolve over time.  Their meaning a century ago might not be their meaning today.  Here are some words whose meaning has changed over generations.

1.  ACCENT, meaning to emphasize or stress, comes from the Latin word "canere" meaning to sing.

2.  BELLBOY used to mean a boy who rang a bell on a ship.

4.  DIAPER, to cover a baby's bottom, means "pure white" and used to refer to fabric with a pattern of small diamonds.

6.  FOG, which is low-lying clouds, used to be coarse grass; foggy could be interchanged with mossy.

7.  GRIN, a small smile, used to mean to scowl, to show one's teeth in anger.

8.  HEARTBURN, an uncomfortable sensation in the chest caused by indigestion, used to refer to jealousy or hatred.

9.  INFANT, a baby, used to mean a child of any age who could not speak.

10.  JUMBO, something gigantic, is the name of a famous elephant that weighed 13,000 pounds.  It used to mean "chief" in Swahili and referred to someone large and clumsy.

11.  KEISTER, someone's bottom, used to refer to a suitcase.

12.  LAST used to mean the highest or the utmost.

13.  MILLINER, a person who makes ladies' hats, used to be a person from Milan, Italy. 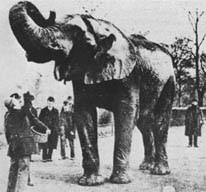 Jumbo the Elephant, who lived in the London Zoo and later performed for Barnum & Bailey Circus, courtesy http://upload.wikimedia.org.