It was on this day in 1963 that Lee Harvey Oswald, the accused assassin of President John F. Kennedy, was shot by Jack Ruby at the Dallas Police Station in front of the flash of media cameras.  While the Warren Commission claimed that Oswald acted alone, conspiracy theories later appeared suggesting that others could have been involved like the Mafia or the CIA (see my post titled "Welcome to Dallas, Mr. Kennedy" dated November 22, 2011).  Others have suggested that Lincoln's assassination might have also been a conspiracy.  Here are several similarities between the two Presidents.


Furthermore, both were assassinated by Southerners.  The male companion of the couple that accompanied them was wounded by the assassin.  Both presidents married a 24 year old woman with dark hair.  Both stood over 6 feet tall.  Both presidents had a lazy eye.  Both men suffered from genetic diseases (Lincoln had Marfan's Disease while Kennedy had Addison's Disease).  Both served in the military (Lincoln in the Black Hawk War, Kennedy in World War II).  Both men held jobs as boat captains (Lincoln on a Mississippi Riverboat, Kennedy on the PT-109).

The list is endless.  For more information, google http://healthandsurvival.com. 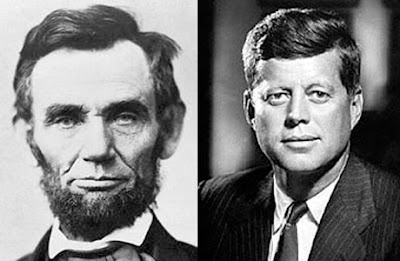