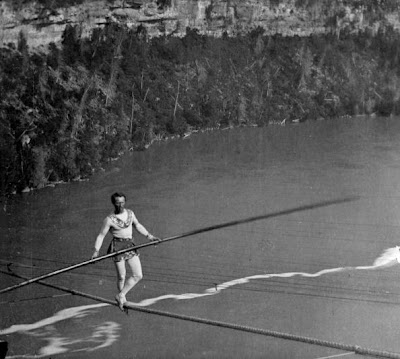 Charles Blondin, a French acrobat and tightrope walker, walked across the Niagara Gorge on June 30, 1859, and made his mark in the record books.  Spectators stood in the tall grass of the riverbank to watch Blondin cross, sporting a dark wig, a purple vest and white Turkish pantaloons.  His manila rope was 3 inches in diameter and 1300 feet in length, stretching from Niagara Falls, New York to Niagara Falls, Ontario.  He held a 30 foot long balancing pole weighing 40 pounds.  The trip took 20 minutes.

But that wasn't enough for Blondin.  On his return crossing, he dropped a bottle down to the Maid of the Mist boat, hauled it back up filled with Niagara River water, and consumed its contents.  He drank a glass of champagne, did a little dance and finished the rest of his crossing in 8 minutes.

On subsequent crossings of Niagara, he rode a bicycle, walked on stilts, sat on a chair, pushed a wheelbarrow, sported a blindfold, cooked an omelette, did somersaults and a handstand.  His most impressive feat was carrying his manager across the gorge piggyback-style.  The world would not soon forget Blondin's impressive feats.

Decades passed.  Crossing the Niagara River became an illegal act.  No one even thought of trying -- until Nik Wallenda entered the picture.  Nik Wallenda is a daredevil with stunt performance in his blood (a seventh generation flying Wallenda).  Four of the members of his family's lives have ended in tragedy while performing stunts.  However, that did not deter Nik, who dedicated his crossing to his Grandpa Carl, one of the four who perished.

Wearing black pants and a red jacket, sporting a balancing pole and attached to a harness, Nik slowly made his way through wind and heavy mists across the Falls.  The wire was 550 metres in length.  With his family waiting on the Canadian side, along with 120,000 spectators, Nik made slow but steady progress.  Within several feet of the rope's end, Nik put on a burst of speed and ran across the rest of the wire.  Beaming, he pumped his fist in the air once he reached the Canadian side.  Reporters were ready with microphones, asking him what his secret for success was.  Nik's reply?  He thanked Jesus! 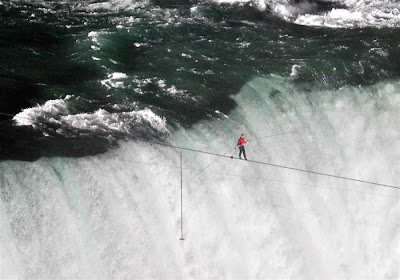