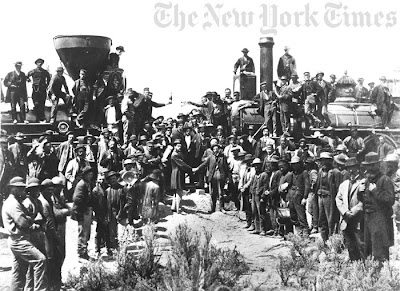 Photo of the Golden Spike circa 1869 courtesy www.nytstore.com.


"Express Train Crosses Nation in 83 Hours" read the headline on June 4, 1876.  The Transcontinental Express, from New York City to San Francisco, was in business.

Back in 1800, Thomas Jefferson, who had never seen a train, had a dream of a nation stretching from "sea to shining sea".  He proposed using steam to propel a "carriage on wheels".  At the time, it took him 10 days to travel by stagecoach from Monticello, Virginia, the site of his summer home, to Philadelphyia, Pennsylvania, temporary home of the nation's capital (1790-1800).

American pioneers took six months to cross the continent by Conestoga wagon along the Oregon Trail.  Although the West was largely unsettled in the mid-1800's, the landscape changed with the California Gold Rush which attracted many migrants, many of whom stayed.  Abraham Lincoln dreamed of a transcontinental railroad and signed a bill to that effect in 1863.

The new railroad was built in large part by Irish immigrants (the Union Pacific section) and Chinese immigrants (the Central Pacific section).  It took six years to complete, hindered by the Civil War at first.  In 1869, the last spike, which was a "golden spike", was driven into the ground at Promontory Summit, Utah, where the two railroads met, amidst a cheering crowd, some standing on the desert floor surrounded by sage brush, others sprawled over and engine with bottles of champagne in their fists.  It was truly a historic moment.

The first trip across the continent, through the mountains of Appalachia, through the Mississippi Delta, through the Badlands of the Dakotas and through the Mojave Desert of Utah was a beautiful sight to behold for the passengers.  The black engine, complete with a "cowcatcher" at the front to clear the track of cows and other wildlife, puffed through the mid-West where buffalo once roamed.

However, progress was still not fast enough for some.  Within 7 years, the Transcontinental Express was in operation, guaranteeing passengers a trip in three and a half days.  First-class passengers rode in plush velvet seats and slept in cozy sleeping berths and were served by attentive porters; for an extra four dollars, they could eat in a first class dining car.

The transcontinental railroad shrunk the United States to a manageable size.  It brought the population westward and several states were added to the Union.  Thomas Jefferson's dream of a nation from "sea to shining sea" was fulfilled. 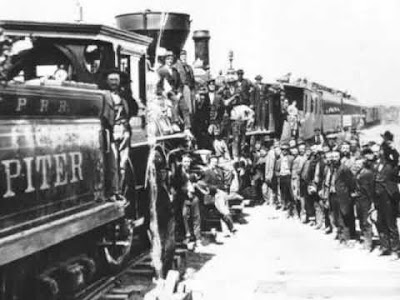 Photo of the Transcontinental Express circa 1876 courtesy www.littleblackstar.com.
Posted by Linda at 13:54