"Crowds on the street gasped as they looked upward.  There he was!  A man, tightly bound in a straitjacket, hanging by his heels high above New York's Times Square.  Suddenly, he began wriggling wildly.  In seconds, he was free, spreading his arms in an upside down bow."*

Harry Houdini, a.k.a. Erich Weisz, was born in Budapest, Hungary in 1874.  He emigrated to the United States with his parents four years later, settling in Minnesota where his father worked as a rabbi.  However, it was not long before his father lost his job and the family relocated to New York City.  The family did not have much money, especially once Mr. Weisz passed away, and it fell upon Erich and his brother to make money.  They started a brothers act in vaudeville.  Both became magicians, but Erich soon learned that his specialty was being an illusionist and escape artist.  Renaming himself "Houdini" after a French magician named "Houdin", Harry learned how to promote himself well by distributing colourful posters and leaflets advertising his upcoming stunts.  One such stunt took place on June 12, 1923 in New York City's Times Square.  Houdini was strapped into a straitjacket and hung upside from a crane used to build the New York subway.  Not only did he escape successfully, but he managed to do so in only two minutes and 37 seconds, caught on film.  Houdini went on to perform more death-defying acts.  Sadly, he passed away on Halloween Day in 1926 from a ruptured appendix.

*Excerpt from the book A People & A Nation:  A History of the United States (Mary Beth Norton). 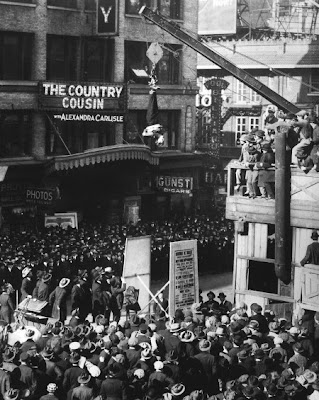 Photo of Harry Houdini above Times Square in 1923 courtesy http://25.media.tumblr.com.