Alcatraz, a high security prison on an island of the same name off California's coast, was home to famous inmates like "The Birdman from Alcatraz", a.k.a. Robert Stroud, and the Mafia mobster Al "Scarface" Capone.  It was also home to Clarence Anglin, John Anglin and Frank Morris, the three men who tried to escape on the fateful night of June 11, 1962, never to be seen again.  What happened to these fugitives from justice?

Brothers Clarence and John Anglin were Georgia farm labourers.  They robbed several banks and were arrested in 1956, serving time in the Atlanta Penitentiary.  However, both were transferred more than once for trying to escape, ending up on The Rock in 1961.

Frank Morris was born in Washington D.C. where he spent time in several foster homes as a child.  By 13 years of age, he already committed his first crime, ending up in a detention centre.  Later he was charged with narcotics possession and armed robbery.  He demonstrated a pattern of escape attempts in prison and was transferred to Alcatraz by 1960.

The three prisoners got acquainted and started to plan their escape from The Rock, located a mile and a half from California's mainland.  Using spoons from the prison dining hall, the three men chiselled a hole in the wall of their cells.  Using sopa, toilet paper, real hair from the barbershop and paint from prison art kits, the prisoners made life-like dummy heads to place on their pillows the night of the escape.  Using raincoats, contact cement and glue from the glove shop, they made a rubber raft and life preservers for the trip across the harbour.  Using an electric hair clipper from the bargershop and drill bits, they made a homemade drill.  Later, they used a vacuum motor for their escape purposes.  They also found an instrument called a concertina to inflate the raft.

On the night of the escape, after lights out, the three men left the dummies on their pillows, opened the holes they had created, climbed through the tunnel to the disused service corridor, climbed 30 feet of plumbing pipes up to the roof, ran 100 feet across the rooftop, dropped 50 feet down the outer wall, inflatted their rubber raft and off they paddled through the frigid waters surrounding Alcatraz Island, nicknamed "Devil's Island".

The local police searched The Rock the following morning, but to no avail.  They also searched the neigbouring Angel Island.  The FBI also took part in the investigation.  Due to the high tides and the cold waters around Alcatraz, officials believed that it would have been unlikely that the three fleeing prisoners would have survived.  A fourth accomplice, John West, had planned to escape too but on that fateful night he was unable to remove his grill; when he finally succeeded and climbed to the roof, the other prisoners were gone.  He gave statements to the police to help them piece the mystery together saying that the Anglin's and Morris were planning on making it to Angel Island where they would steal a car, steal some civilian clothes, escape by boat to the mainland and fall in with the general population.

Initially, the FBI was not able to track down any car thefts in the 12 day period following the escape.  No one reported having clothes stolen either.  However, a Norwegian freighter crew member did report seeing a body wearing prisoner-type clothing floating in the ocean 20 miles north of the Golden Gate Bridge in July of 1962.  It was also reported that a life preserver bearing teeth marks was found in the water.  After a 17 year investigation, the FBI officially closed the case.

However, a 2011 National Geographic program about the Alcatraz escape reported that footprints were found leading away from the raft on Angel Island.  They also claimed that a car was reported stolen that night.  Even so, no conclusive evidence has been found to determine the fate of the three prisoners.  The case remains unsolved.

The prison closed in 1963, the year after the famous escape.  It is now a museum visited by 1 million tourists each year. 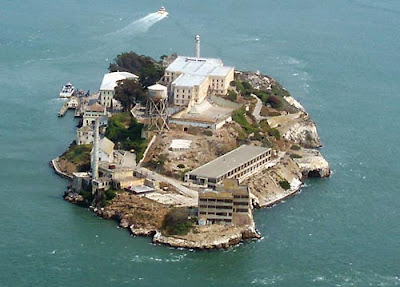