Today marks the beginning of the diamond jubilee year of Queen Elizabeth II.  Her coronation took place on June 2, 1953.  Here are ten things you may not know about her.

1.  She has no passport.  Eventhough she has visited 160 countries, she doesn't need one as each passport is issued in her name.  She also has no driver's licence, although she does take occasional joyrides around her property.

2.  She has two birthdays.  Her official one is April 21, 1926.  However, in each Commonwealth country, her birthday is celebrated either in May or June.

3.  For safety reasons, during much of World War II, Princesses Elizabeth and Margaret stayed at Windsor Castle or Balmoral Castle in Scotland, especially during the London Blitz.

4.  However, when Elizabeth turned 18, she begged her father to let her serve in the military and he acquiesced.  She trained as a mechanic and drove a military truck as part of the Women's Auxiliary Territorial Service.

5.  Elizabeth paid for her wedding dress with ration coupons, given the war had just ended two years previously and Britain was hurting economically.

6.  Elizabeth married her third cousin, a former prince of Greece and Denmark.  The bride did not take her husband's name, Mountbatten, but chose to remain a Windsor.

8.  Elizabeth was shot at while on horseback in her birthday parade in 1981.  Unruffled, she simply calmed her horse down and kept riding.

9.  In 1982, a stalker scaled a Buckingham Palace drainpipe and entered the Queen's chambers.  She simply engaged him in conversation for 10 minutes until a palace worker was able to apprehend him. 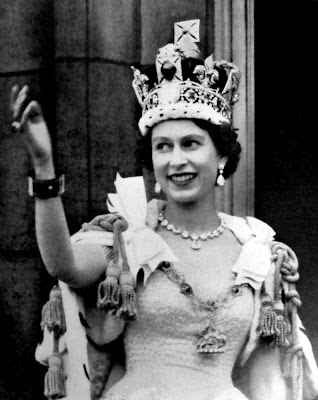 Photo of Queen on balcony of Buckingham Palace courtesy http://1.bp.blogspot.com.