Bette, a 13-year-old girl wearing a skirt, blouse and saddle shoes, walked down Simcoe Street in Oshawa, accompanied by her two sisters, Marlene and Sandra.  They had just left their high school, Oshawa Collegiate, and were ready for an evening of work in their father's store.  Cars, mainly General Motors products, drove back and forth down the two lane street.  The girls passed the millinery shop, lovely hats gracing its windows, the Armouries, and the Queen's Hotel, where unsavoury characters sometimes lingered at night.  After five blocks, they came to a stop at a brick building with with large windows that said Stroud Fruit Market on a large sign.  They entered the store, donned their white frocks, put on their name tags and took their places at the three cash registers.  "Boxes or paper bags?" asked the girls as each customer passed through the line.

Occasionally, between customers, the girls faced the shelves, brought the cans to the front to make the display neat; swept the wooden floor; waited on the customers (ex. weighing their bananas);  climbed on the counter and cleaned the windows with Windex and newspaper, watching the cars whiz by.

Stroud Fruit Market had three aisles:  one offered fruit and milk (19 cents a bottle) and butter (59 cents a pound); the second offered bread (16 cents a loaf) and baked goods; the third offered canned goods and household items (Kleenex 2 x 33 cents).  A sweets section offered chocolate bars (small - 5 cents, big -10 cents).  The city of Oshawa was a growing community in the 1950's: however, despite competition from a local meat store, a Loblaw's, an A&P and a Dominion, the Stroud Fruit Market still enjoyed a brisk business.

Mr. Stroud, would man the butcher counter, purchasing fresh beef and pork at the St. Lawrence Market three times a week along with fresh fruits and vegetables.  The girls looked forward, on occasion, to accompanying their dad to Toronto to purchase meat and produce.

On this particular day, the sisters waited on Mrs. Humphries, Mrs. Walker and Mr. Drew, the owner of the Fruit Market building.  After the customers paid their bills, young boys bagged their groceries and carried them out to their vehicles.  At closing time, the three Stroud girls hopped into their father's car and headed north along Simcoe Street to their house, tired after a hard day's work. 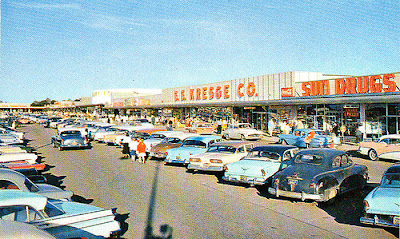