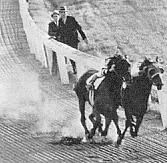 Photo of The Greatest Race of the Century courtesy http://thesaturdaypost.org.


"At four o'clock, the two horses parted a sea of humanity and stepped on to the track before a crowd...keyed to the highest tension I have ever seen in sport.  'Maryland, My Maryland' wafted over a strangely quiet grandstand.  The spectators were too full of tension...the type of tension that locks the throat." (Description of "The Horse Race of the Century", November 1, 1938, Seabiscuit:  An American Legend by Laura Hillenbrand)

Seabiscuit is a book based on the horse of the same name who managed to beat War Admiral in a race held on November 1, 1938 at Maryland's Pimlico Track.  Forty thousand fans watched the race from the grandstand.  Forty million Americans listened on their radios, including President Roosevelt who postponed his meetings until the race was complete.  Although Seabiscuit was the underdog, he managed to outsmart and outpower War Admiral in a race that would go down as "The Race of the Century".

Author Laura Hillenbrand takes us into the world of the race horse.  We learn how these powerhouses are fed special diets to beef up.  We learn how they are trained:  a sheep was placed in one horse's stall to calm him down; a dog was placed in another horse's stall to stir him up.  We learn the dangers they face on the racetrack as they run with only an inch or two between them and their opponent.  Once a horse is lame, his career is usually over.

Ms. Hillenbrand also takes the reader into the world of the jockey, detail by detail.  She describes his harsh life, the danger of the racetrack where fellow jockeys often played dirty, doing whatever they could to win.  She talks about the pressure felt by the jockeys to stay thin, resulting in bulimic or anorexic jockeys who would do anything to keep to their assigned weight limit.  The jockeys barely survived on their meagre salaries and could be cast off at any time.  Attempts by jockeys to unionize were met with suspicion.  A jockey's life was full of risk.

Ms. Hillenbrand also describes the life of the horse trainer.  He not only focussed on the physical demands of the horse, but also the mental demands.  What would be the best strategy to win the race?  How would the other horses act at the start?  Was the horse a good starter?  Did the horse like to come from behind?  Could the horse run well in the rain?

The book also focusses on the role of the media in horse racing.  Reporters always had their favourites.  While the grandstand held so many thousand spectators, many more would listen on the radio.  Thousands of words were devoted to writing about one race.  Journalists would track the progress of a horse, watching his workouts.  In the case of Seabiscuit, his trainer often ran his workouts after sunset so that the press could not see his performance:  he wanted to keep them guessing.

We learn about the horse racing fans of the 1930's and early 1940's:  famous people like President Roosevelt and Bing Crosby and Sonja Henie followed the sport.  However, the average Joe on the street could also be an ardent fan.  Wagers were placed on the big names:  War Admiral, Wedding Call and Kayak.  Some went home with their pockets full; others lost everything.

The climax of Seabiscuit's career came with the Santa Anita Handicap held on March 2, 1940.  Thoroughbred Record correspondent Barry Whitehead described how the fans staked out their seats in the grandstand with blankets like a scene from the Oklahoma Landrush.  Red Pollard, returning from a potentially career-ending injury, rode Seabiscuit.  Another jockey road War Admiral.  At first it was neck and neck, but in the end, Seabiscuit won by three furlongs.  Mr. Pollard, who had promised his wife flowers from his winning blanket, never had the chance to deliver them as they were picked off of his mount by excited fans.  Mr. Howard, the champion's owner, walked away with $100,000.  It was The Greatest Race of the Century.

Note:  Laura Hillenbrand's Seabiscuit is a well-researched, well-written book that hit Number 1 on the New York Times Bestseller list and was later made into a motion picture starring Toby McGuire. 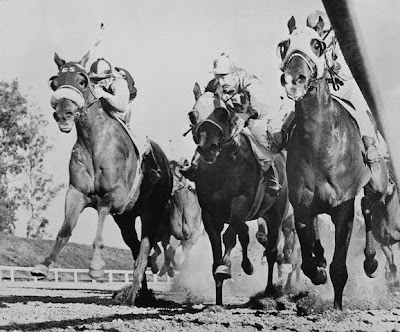