Stalag Luft III, a Nazi prisoner of war camp 100 miles southeast of Berlin, now part of Poland, was the site of the largest Allied escape during World War II.  The escape required incredible brain power, manpower, materials and courage.  Six hundred prisoners worked on the project.  And yet only three made it to freedom.  What happened on that fateful day in March of 1944?

The plan to dig three tunnels at Stalag Luft III was implemented in April of 1943.  One tunnel, nicknamed Tom, started in a dark corner of Hut 123.  A second tunnel, Dick, was located under a bathroom drain in Hut 122.  A third tunnel, Harry, was hidden behind a stove in Hut 110.  Some prisoners built a vaulting horse big enough to house two diggers; they would move the horse over the opening to the tunnel, and then the workers would crawl down it and start to dig, while several prisoners would distract the guards with their vaulting.  They made sure that they dug 30 feet below the surface so the guards would not hear them work.

The resourcefulness of the prisoners amazes me.  Everyone had a job:  Robert Bushell was the overseer of much of the project; Tim Walenn forged official documents for when the fugitives were stopped and asked for identification; Al Hake was a compass maker to help the escaped prisoners find their way to neutral countries; Des Plunkieett was a map tracer; Tommy Guest was the head tailor, trying to outfit the prisoners in civilian clothing for life on the outside; "Lookouts" made sure that the guards were distracted and not privy to what was going on at digging time; and "Penguins" wore pants with yellow sand hidden inside (excavated from the tunnels) which they slowly let fall out as they paced back and forth on the prison grounds.

A list was compiled with prisoners deemed fit for the escape; those who were claustrophobics, for example, were prohibited from being added to the list since the tunnels were so narrow.  As the men made progress on the tunnels, the guards discovered "Tom", and shut it down.  "Dick", which they had been using for storage anyway, was shut down.  Only "Harry" remained.  The prisoners waited for a moonless night to make their move.  On March 24, 1944,  they seized the opportunity to try out "Harry".  The prisoners, mostly Commonwealth Airmen, crawled through Harry one by one.  The first to reach the exit discovered that they were only a few feet shy of the forest, their intended target, which made them more visible to the guards.  After the 76th man, popped his head out, they were busted.

The Nazis searched for them for weeks.  Sadly, all of the fugitives were recaptured with the exception of three men, two of whom reached Sweden, the third ending up in Spain.  Hitler ordered that fifty of these prisoners executed and the remaining ones were sent to another prison where they lived out the duration of the war.

Note:  Paul Brickhill, one of the prisoners who helped orchestrate the escape, but who was not on the list due to his claustrophobia, wrote a book called The Great Escape documenting the experience.  A movie of the same name debuted in 1963 starring Steve McQueen. 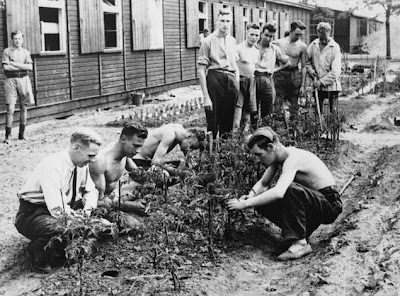