As Hurricane Sandy makes it way up the Eastern Seaboard of the United States, here are ten facts you may not know about these storms.

1.  There are on average 85 hurricanes per year.

3.  An Australian first named a hurricane back in the 1920's after a politician he didn't like.

4.  The practice of naming hurricanes after people did not officially take place until the 1950's.  The hurricane season lasts from June until November.  Each season has six lists of names with 21 on each list.  These lists are repeated every seven years.  Hurricane names are English, French and Spanish.

5.  The costliest hurricane was Katrina with a price tag of $45 billion, with a death toll of over 1300 and with a total of 1 million displaced persons.

6.  Jupiter's Great Red Spot is a hurricane that has been churning for 400 years.

8.  Joespeh Duckworth was the first person to fly through the eye of a hurricane on June 27, 1943.

9.  The most destructive hurricanes have had their names retired including:  Dennis, Katrina, Rita, Stan and Wilma. 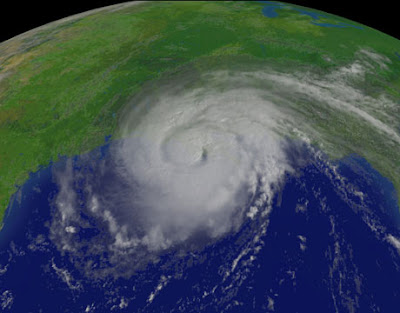 Photo of Hurricane Gustav courtesy www.thedailygreen.com.
Posted by Linda at 15:07