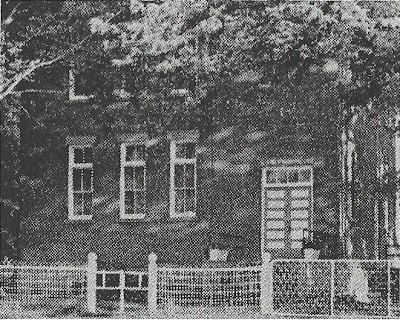 
Twelve year old Harold road his bike up the hill.  Just a little further and he would be at Winchelsea School, a red brick two storey building with high windows and a bell tower.  Finally, he finished the last mile, one of five.  He carefully parked his bike.  The bell rang and he entered the school through the boys' entrance.  There was only one class composed of Grade 7 and 8.  Harold stood at attention as he sang "God Save the Queen", facing the large Union Jack hanging at the front of the classroom.  He then bowed his head like the other boys and girls as they recited the Lord's Prayer.

Mr. Black handed out the math tests that the students had written the day before.  But Harold did not get his back.  He watched horrified as Mr. Black proceeded to hold up his math test and say:  "Harold failed his math test.  He doesn't know how to do math equations.  He's horrible at math."  And Harold's classmates stared at him and snickered.

Harold was so mad he could see red.  But rather than throwing up his hands and not trying, he dug his heels in deeper, vowing to never fail a math test again.  He worked harder and harder at completing his math homework.  He did extra math practice every day.  If he got the wrong answer, he would try again until he arrived at the right response.  He was determined to prove Mr. Black wrong.

As the months went by, Fall turned to winter and Harold could no longer ride his bike to school.  Sometimes he got a ride on a neighbour's sled.  Other times he walked, trudging through deep snowdrifts with the wind blowing in his face, forming miniature icicles on his tuque.  But he didn't miss a day of school.

And he never missed an opportunity to practice his math skills.  With each test he wrote, his mark improved.  It wasn't long before Harold's red F's turned to red A's.  He didn't receive just one A, but several.  The other students started to come to Harold for help if they needed it.

Two years later, Harold graduated from Grade 8.  That Fall, he moved to St. Mary's Ontario, a quaint town full of stone covered buildings on the banks of the Thames River, where he boarded with a family during the week.  He enrolled at St. Mary's High School where he continued to improve his math skills.  He looked forward to each weekend when he could return to his parents' farm in Kirkton and help with the harvest.

This routine continued for five years.  Harold looked forward to Christmas and Easter when he received an extra long holiday from school.  However, he was always happy to return, given what an excellent student he was.  He also found he excelled at Music and enjoyed singing in the church choir.  He also took up long distance running.

When Harold approached graduation, his father told him that he could only afford to send one of his sons to university.  Since Harold's brother Truman was the oldest, he would take over the family farm.  That gave Harold the chance to attend university and he worked harder than ever.

Sure enough, Harold was accepted at the University of Western Ontario.  Guess what his major was?  Math, of course.  He chose to minor in Physics.  He continued his long distance running career, those long walks to Winchelsea helping to build up his endurance.  Harold excelled at Western, continually ending up on the Deans Honour List and graduating with Honours in 1925.

Harold applied to the Ontario Teachers' College and was accepted.  He packed up his things, said goodbye to the cornfields of Kirkton, and headed for the train station in St. Mary's.  There he boarded a train bound for the metropolis of Toronto.  Once again, Harold excelled at Teachers' College.  He was a natural teacher:  his enthusiasm, his knowledge of his subject matter and his dedication all paid off.

But he was worried about getting a teaching job the following year since Ontario was in the midst of a recession.  However, he persevered.  Easter weekend arrived and Harold hopped a train bound for Kirkton.  At the farm, he waited anxiously by the phone.  At first, there was a long silence interrupted by the chatter of his family.  However, then he got a phone call from a Toronto High School.  Was he interested in a job?  This was followed by another phone call and another job offer.  Finally, he received a third offer, all in one weekend!  Which job should he accept?

He said yes to Toronto's Eastern High School of Commerce.  He started his job in September of 1926, arriving the first day of school dressed in a smart suit and a snappy tie.  From the day he set foot in Eastern High School, Mr. Tufts made his mark.  His smile lit up the room.  His hearty laugh filled the hallways.  His steady hand lead the high school band.  His neat blackboards, the "neatest in Ontario" according to the provincial inspector, were appreciated by his pupils.  His reassuring manner helped daily the students who struggled in math, something he could relate to.  Mr. Tufts never had a student he didn't like.  And he never had a student who didn't like him and appreciate his kind manner.  After forty years at Eastern High, Mr. Tufts retired, but he was not forgotten.

Back in Winchelsea, Mr. Black has long passed away.  But the red brick schoolhouse is still there, now used as a residence.  It stands as a testament to young Harold, who proved we can do anything if we put our mind to it.

"We can do all things through Christ who strengthens us." (Phillipians 4:13) 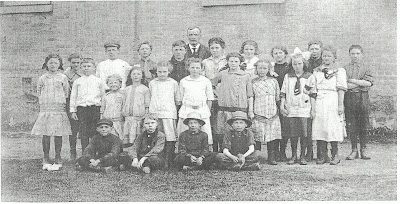