An Icon of Canadian Culture

Today I mentioned Eaton's to my daughter and she didn't know what it was.  What a shame that an "icon of Canadian culture" is now forgotten.  Timothy Eaton's first large department store was located on Yonge Street in Toronto.  Later dozens of Eaton's department stores popped up all over the country.  In fact, it was estimated that 60% of Canadians lived within a 30 minute drive of an Eaton's.

One of Timothy Eaton's secrets to success was his mail order catalogue, which debuted in 1884.  Here is a brief history. 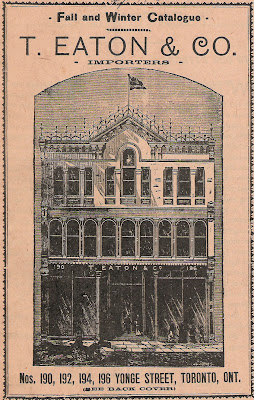 Timothy Eaton first published a 34 page catalogue in 1884, in large part as a means for Canada's rural residents to have access to the same products that city dwellers enjoyed.  by 1896, the mail order office was filling a tall order:  135000 parcels were delivered by post as well as 74,000 by express.  By 1920, Canadians could buy everything from clothes to farm implements to prefabricated homes and barns.  Catalogue offices were located in Toronto, Winnipeg and Moncton. 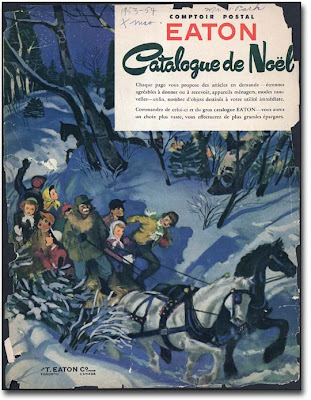 
Eaton's introduced incentives to lengthen the list of people who received the annual catalogues.  One B.C. housewife sent in a list of neighbour's names and received a free winter coat. 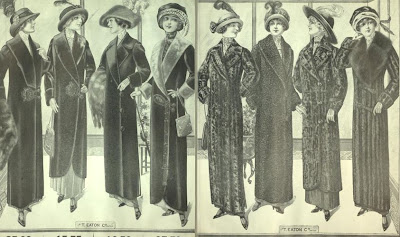 
Becoming an icon of Canadian culture, the Eaton's catalogue served not just as a mail order service but also reading material for new Canadian immigrants to learn English, paper for paper dolls for young girls, goalie pads for young boys and toilet paper in Canadian outhouses.  The catalogue was even featured in Canadian literature:  read Le Chandail by Roch Carrier to learn about a Montreal hockey fan who orders a Canadiens hockey jersey from Eaton's but instead receives a Toronto Maple Leafs sweater.  His mother addresses her letter, "Cher Monsieur Eaton", as she tries to rectify the problem. 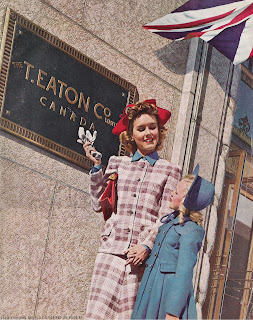 
Sadly, with the growth of cities, and the competition of Simpson-Sear's catalogue, the demand for the Eaton's catalogue diminished. The last issue was printed in 1976. It was the end of an era.