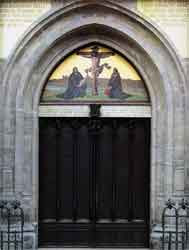 Photo of Schlossekirche where Luther nailed his 95 Theses courtesy http://en.wikipedia.org.


Yesterday, Brantford Christian School students were honoured with a visit from a hooded monk with a large cross around his neck, a giant Bible in his hands and Latin spouting from his lips. Who was this hooded man?

On October 31, 1517, Martin Luther nailed his 95 Theses to the door of the Schlossekirche (Castle Church) in Wittenburg, Germany. Within two weeks, his ideas has spread across Germany; within two months, they had travelled across Europe. The stirrings of a Reformation had awakened the Christian world.

Martin Luther was tired of the Roman Catholic churches doctrines: whip yourself if you want to pay for your sins; buy your way into heaven (indulgences). In his 95 Theses, Luther wrote:

"Why does the Pope, whose wealth today is greater than the wealth of the richest Crassus, build the basilica of St. Peter with the money of poor believers rather than his own money?"

Martin Luther knew that the only ticket to Heaven was through Jesus Christ and his death on the cross. His courage to speak out against the Roman Catholic Church paved the way for the Protestant Reformation. Today, in Germany, five states including Saxony (my father-in-law's home province) and Thuringer (my mother-in-law's) celebrate Reformation Day as an official holiday. 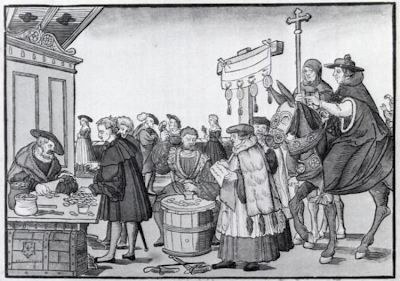 "A Question to a Mintmaker" woodcutting (showing the payment of indulgences) courtesy http://en.wikipedia.org.