Last week when I drove Thomas and Jacqueline to school, I saw an eagle soaring above the railroad tracks.  I took note of it since it was only the second time I had seen an an eagle in the area, the first being a few weeks ago when it was perched on a dead tree.  Arriving at the school, I stayed for the weekly Monday morning assembly where Pastor Jeff spoke about eagles.  He said that small birds flap their wings and work hard, not always making a lot of progress.  However, eagles, with an eight-foot wingspan, find an updraft caused by either warm winds (thermals) or the surrounding terrain (mountains) and soar on it, thereby conserving their energy.

Similarly, as Christians, we should not work so hard flapping our wings, but give our burdens to God who will "raise us up on eagle's wings".  After we listened to Pastor Jeff, Mrs. Mann had us sing a song with the line "soar like an eagle".  I guess God was trying to tell me something.  All weekend long, I had felt like I was flapping my wings.  I was reminded that if I give it up to God, he will help me rise above my troubles.

Today I learned that eagles are the only bird to actually fly directly into the eye of a storm.  They use the powerful winds to raise them up above the clouds where they can ride out the storm.  They're not only strong creatures, but also intelligent.  So, the next time you are facing a storm, use God's love to raise you above the turbulence.  He wants you to soar like the eagle. 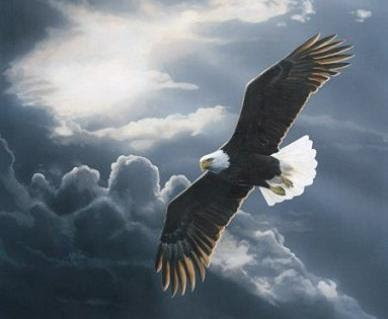