1.  Pumpkins originated in Central America in 7000 B.C.  Now they grow on six continents.

4.  One serving of pumpkin contains only 0.5 grams of fat.

5.  Pumpkin is rich in potassium, Vitamin A and fibre.

7.  Nineteenth Century New Englanders thought that pumpkin was a cure-all, healing people from snakebites and diarrhea, and getting rid of freckles and wrinkles.  It is true that pumpkin helps ward off prostate cancer.

8.  At the "Punkin Chunkin" Festival held every year, pumpkins are shot 5000 feet into the air through cannons.

9.  Thirty varieties of pumpkins exist, Connecticut Field being the most popular.

10.  If you place your pumpkin on the porch at Halloween, pranksters have 14 hours of daylight to smash it.

11.  A pumpkin is a squash which belongs to the cucurbita family of vegetables.

12.  The first mention of pumpkins in literature occurs in the 17th Century fairytale "Cinderella".

13.  The Pumpkin Capital of the World is Morton, Illinois, home of Libby's Factory which produces canned pumpkin.

14.  The Native Indians grew pumpkins, a staple of their diet which helped them survive the long winters.

15.  Christopher Columbus took pumpkin seeds back to Europe on his return voyage. 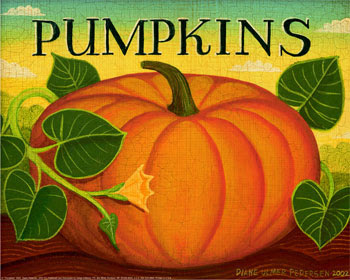