It was on October 1, 1971, that ten thousand guests arrived at the gates of Disney World.  Motorists paid 50 cents to park their cars.  The monorail took them from the parking lot to the front gates of the Magic Kingdom.  At the turnstiles, they purchased tickets:  adults were $3.50, juniors were $2.50 and children were $1.00.  Inside the gates of the Magic Kingdom, a Dixieland band played "It's a Hot Time in the Old Town Tonight" and a parade made it's way down Main Street U.S.A.  Ambient music wafted over loudspeakers as guests made their way along the streets.

Walt Disney, who had passed away in December of 1966, was so excited about the prospect of building Disney World.  He had pointed out that, at 27,500 acres, they had the luxury of space in Florida, something they didn't have at Disneyland in California.  He had laid out a plan for several lands including:  Adventureland, where guests could lounge on the Jungle Cruise; Fantasyland, where children could ride the Dumbo Flying Elephants or Mad Tea Party; Frontierland where guests could practice at a shooting gallery; Liberty Square where guests could be educated at the Hall of Presidents; and Tomorrowland where guests could visit the Grand Prix.  And of course the "piece de resistance" was the Cinderella Castle where guests could dine.

Although the media had anticipated that 200,000 to 300,000 guests would arrive on opening day, that was not the case.  October was the off season, for one thing.  Also, the official opening would not take place until later that month when NBC would televise a program hosted by Bob Hope and featuring guests like Julie Andrews.

Because of the smaller crowds and because of previous experience, organizers were able to avoid some of the mishaps at Disneyland 16 years before.  Walt Disney's dream was seen to its fruition, thanks in large part to his brother Roy.  Sadly Roy passed away in December of 1971.  But the Disney dream continued:  Epcot was built in 1982,  Hollywood studios in 1989, and Animal Kingdom in 1998. Even with this expansion, Disney is not close to filling its 27, 500 acres.  Happy Birthday, Disney World! 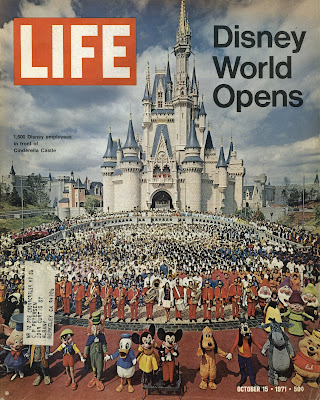 Cinderella Castle surrounded by cast of 5000 on opening day.