When I was pregnant with my daughter Jacqueline, I taught Grade 2.  For our creative writing program I would have the students write a story each week.  I would give them a designated topic and then they would write a story.  At the beginning of the year, I set a goal of a four sentence story.  Then each week we would add a sentence.  I was amazed at how some of the students would give me more sentences than I'd asked for; they had ideas galore as their imaginations worked overtime.  They were little authors!

However, there were two kids in the class who struggled.  One boy's first story looked like it had been typed on a typewriter; it was a series of random letters.  The other boy wrote:  "Me ma ma mooe."  His verbal translation was:  "My mother made me go to preschool."  I knew I had my work cut out for me, but I also knew that these two boys were willing to learn.

Each week, I chose a "story of the week" which I would type out and display on our bulletin board.  Each week these two boys would strive to write one sentence on their own while some of the other students were writing ten.  Needless to say, both boys also struggled with reading.

However, as time went by, they started to gain confidence.  They started to print words on their own.  They started to get the concept of what a sentence was (and later, a story).  Finally, in the Spring, first one and then the other boy received the Story of the Week award and had their compositions mounted on the wall for all to see.  They were little authors, too.

I miss that class and I miss their love of creative writing.  I was so proud of my students, especially the two boys who had struggled.  They persevered and they never gave up!  Who knows?  They might go to college and become journalists one day. 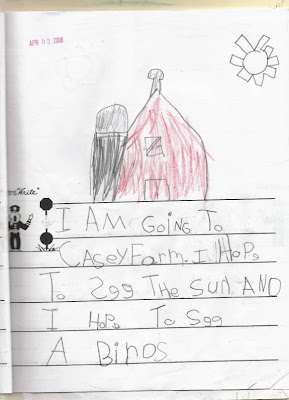