To the Memory of my Mother-in-Law

It was 18 years ago today. I was teaching fulltime in Paris and had just come home from a busy but successful day. The sun was shining. Summer was in the air. My husband and I were newlyweds living in an apartment at the Delta in Hamilton, where King and Main Streets cross paths. I arrived at the triplex, opened the front door and walked past the first floor apartment where my husband's Oma lived and climbed the steps to the second floor. I put the key in the lock to open our apartment when I saw Mrs. Hunt, the second floor tenant, approach me out of the corner of my eye. I thought: I wonder what gossip Mrs. Hunt has to share today. However, today she did not have gossip.

"I'm sorry to hear about your mother-in-law," she offered. Eventhough my mother-in-law was really sick, I was still shocked to hear the words. "Did something happen?" I asked. Mrs. Hunt, said "Yes, didn't you hear? She passed away this morning." "Oh no!" I exclaimed. I thanked her for her condolences and then climbed the stairs to my apartment, waiting for my husband to return.

While we were all sad to see Rob's Mom pass away, at the same time I know that Rob felt a certain sense of relief knowing that she wasn't suffering anymore. She had endured a long bout with cancer. A year previously she had first been diagnosed. We thought that she might not make it to our wedding and even toyed with the idea of getting married in the hospital just so Rob's Mom could be a part of the ceremony. However, the Wednesday before we got married, we arrived at the hospital for a visit, only to find that her bed was empty! Worried, we inquired about her whereabouts and were told she had been released.

Later, we found out that Rob's Mom's surgeon had felt that it was more important for her to attend our wedding than for her to have surgery that day; he wanted her spirits to be up and postponed her operation until two days after the ceremony. Sure enough, Rob's Mom not only attended our wedding, but really enjoyed herself. I'll never forget the shiny blue dress she wore and the smile that she flashed everyone. She was a woman that was happy to be alive and thanked God for the blessing of family.

Right after our wedding, my mother-in-law had successful surgery and the doctor was optimistic that he cut out all of the cancer. She had a new lease on life. She had energy again. More than ever before she realized what mattered most in life. She did not let little problems get her down. And she focussed on her family. I am so glad that I was able to spend a lot of time with Rob's Mom during the last year of her life. I got to know her even better than before and discovered again and again what an amazing human being she was. I lived with my future in-laws the year before Rob and I married. During this time, Rob's Mom would do my laundry. She would buy the special crackers that I liked to snack on. She would listen to me when I had a hard day at work. And she would always include me in family activities. I already felt like part of the family.

Now, I know that she loved Rob intensely and wanted nothing but the best for him. She would not have accepted just anyone as a wife for her son. He was the boy who,once a grown man, was still greeted with a coffee in the morning and sung "Guten Morgen Liebe Sonne". He was the teenage boy who got a summer job which involved climbing ladders. He felt uneasy and therefore she let him quit. He was the baby she held so lovingly, her first born. And now he was a man, about to get married. Early on, when Rob and I were dating, Rob's Mom questioned a couple of the decisions we made. Like a mother lion, she wanted to protect her little cub. She wanted to make sure that I had her son's best intentions at heart. Now that I am a Mom, I can understand her reasoning. Fortunately, in the end the wedding went smoothly and everyone had a good time. However, when we got home from our honeymoon, I really felt like a change had taken place. I wasn't Rob's fiance anymore, I was his wife. And even though Rob's mom had her own daughter, I felt like her daughter as well. This feeling was never more apparent than a couple of months later when Rob invited some of his high school friends over one evening. Unfortunately, Rob and I had words in front of his friends. I stormed up the stairs in tears. Rob's Mom took me aside and tried to comfort me. She quickly figured out what was wrong and explained that she knew exactly how I felt. She too had been a young bride surrounded by her husband's friends. She knew how it felt to be left out. Rather than defending Rob, she backed me up. She made me feel so much better. I'll never forget her kind words that day. I'll never forget her calm manner. And I'll never forget her gentle touch. She had a lot of class and I feel privileged to have known her and privileged to have called her "Mom". For a short time, I was blessed enough to have two Moms. In the meantime, she now has four grandchildren. I know she would have been so proud of them. I see her in my little girl with the smallest gestures, like when she sips out of a straw. I hope that we can keep her memory alive. May she rest in peace! 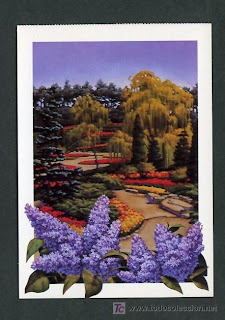