Today, I am writing about rejection.  Normally, we see rejection as a bad experience, but that isn't always the case.  Here is a list of famous authors who received many rejection slips before their work was published.


REJECTIONS RECEIVED BY FAMOUS AUTHORS*
Richard Hooker’s MASH – 21 publishers
Richard Bach’s Jonathan Livingston Seagull – 18 publishers
Louis L’Amour – 350 rejection slips
John Creasy – 774 rejection slips
Dr. Seuss’s And to Think They Saw it on Mulberry Street – 27 publishers
William Kennedy’s Ironweed – 13 publishers
Pearl Buck’s The Good Earth – 14 publishers
Norman Mailer’s The Naked and the Dead – 12 publishers
Margaret Mitchell’s Gone with the Wind – 25 publishers
Mary Higgins Clark – 40 publishers
John Grisham’s A Time to Kill – 15 publishers; 30 agents
Jack London – 600 rejection slips
Chicken Soup for the Soul (Volume 1) – 33 publishers
Alex Haley – once a week for four years; took nine years to write Roots
Julia Child’s Mastering the Art of French Cooking – 2 rejections by same publisher (took eight years to write and edit)
*Taken from Chicken Soup for the Writers' Soul.
When I look at the number of rejections that these authors faced, I realize that what makes a published author isn't someone who doesn't fail, but someone who doesn't give up.  Perseverance is the name of the game.  If you think you have a good idea, keep writing and rewriting until you find a forum for your work.  If that forum is your family, that’s great.  If that forum is a library or a church or a school, that’s even better.  I just read today that John Steinbeck was told that his novel The Grapes of Wrath, based on a Depression-era migrant worker family who moves from Oklahoma to California, was too disturbing to print.  And yet that novel went on to be published on March 14, 1939, selling close to half a million copies by the end of the year and creating waiting lists months-long at libraries.  Although banned and burned in both Buffalo, New York and Kern County, California, The Grapes of Wrath went on to win the Pulitzer Prize in 1940.  It was adapted into a movie starring Henry Fonda, as well as a play, being performed at the Stratford Festival this summer.  It is inspiring to know that, despite past rejections, these authors went on to carve a niche in the literary world. 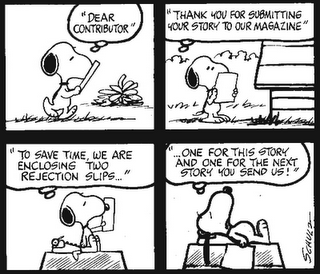