Heaven is for Real

I read a book recently called Heaven is for Real by Todd Burpo.  A few years ago Todd's son, at just under 4 years of age, was hospitalized due to a mysterious illness.  After a mistaken diagnosis, a second doctor diagnosed the boy with a ruptured appendix.  He was so sick he was close to death, but fortunately the doctor performed surgery, the boy rallied and survived.  A few months after his illness, the boy mentioned to his father that he saw Jesus when he was in the hospital.  Shocked, his dad asked more questions which revealed that the boy had also seen his great-grandfather, whom he'd never met, and his sister.  His dad reminded him that he had only one sister.  He corrected him, saying that this was the sister who had died in his "mummy's tummy".  Again, the boy did not know anything about his mom miscarrying a girl for it happened before he was born and they had never discussed it.

When I read Heaven is for Real, I felt a renewed sense of hope.  I always believed in God; I always believed that Jesus is the Son of God and died for our sins; I always believed in Heaven.  However, it was nice to hear it from someone who has actually experienced it first hand.  It was also nice to think of the possiblility that the four children that I miscarried years ago might be waiting for me when I go to Heaven.  What a comforting thought!

Now, some people claim that Todd Burpo has an ulterior motive by writing this book since he is a pastor.  However, you could argue that point for every book you read.  The details of the book seem genuine.  It was a trying time for the family.  You would wonder why they would want to conjure up such painful memories if their story was false.

One point that stands out in my mind is that the little boy emphasizes the fact that Jesus really loves children.  Remember the song we sang as children:  "Jesus loves me this I know"?  It's true.  And remember that we're all God's children.  Yes, Heaven is for real! 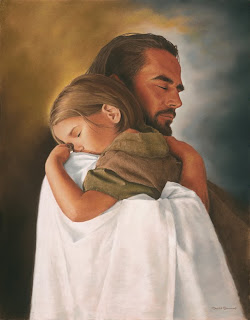