He Did Not See the Flowers

Every Spring my husband, a university professor, starts teaching his intercession courses again.  One of the topics he discusses is Africville, a former black “ghetto” on the shores of in .  He shows a video to his students made by the National Film Board of Canada called “Remember Africville”, featuring a black man named Gus Wedderburn who was asked to investigate the ghetto in the 1950’s when the city planners were considering tearing it down.  The man, quite well spoken, described as being devoid of coloured people and said that “where the asphalt ended and the dirt road began, that is where Africville started.”  Although Africvillians paid taxes, they did not receive the modern amenities that the rest of did.  Africvillians tried hard to keep up the physical appearance of their village, and yet this outsider “did not see the flowers”.  Rather, he saw a ghetto.  He did not see the families that had toiled for over a hundred years to maintain their jobs and their homes.  He saw a ghetto.  He did not see , at the centre of their community, where parishioners gathered on Easter Sunday morning for baptism on the shores of .  He saw a ghetto.  He did not see the students walking to the church, which doubled as a school, on a Monday morning with books tucked under their arm.  He saw a ghetto.  He did not see the flowers.  Unfortunately, in the mid-1960’s, the city planners razed Africville and turned the land into a park.  Africvillians were paid $500 for their land, an amount that was considered to be high by the elderly homeowners.  Most residents were relocated to tenements in the city of , as urban planners did in American cities like and .  Yes, now these residents had modern amenities like heat and running water, but they no longer owned anything.  Furthermore, they lost their sense of community.  It has been over forty years and they still miss that community.  In fact, “the hermit of Africville”, Eddie Carvery, now camps out in , where he once lived with his family.  Below is a sonnet I wrote about the community.  God Bless Africville!
AFRICVILLE
Africville had no millionaires,
But it had Carvery's and Skinner's.
Africville had no billionaires,
But welcomed sinners.
Africville had not one street light,
But its sunsets lasted for hours.
In Africville we smelled garbage at night,
But we also smelled the flowers.
Africville roads were not on par,
But it sat on a pretty bay.
Africville had not one street car,
But the freedom train came one day.
They razed Africville; what's the fuss?
A "ghetto" to some; home to us. 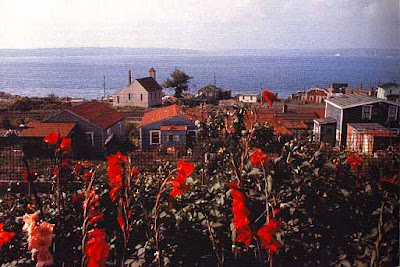